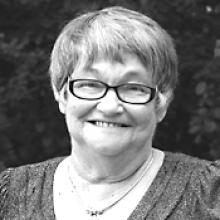 PATRICIA ARLEIN MCKENZIE Patricia passed away peacefully on August 8, 2015 at St. Boniface Hospital, Winnipeg, Manitoba with her family at her side after a valiant fight against cancer. Born in Benito, Manitoba, on November 26, 1941, Patricia graduated from the University of Manitoba with a Bachelor of Arts. She married Brian, an aspiring Air Force pilot, in 1964 and during their 51 years of marriage raised two children while living in Europe, the United States, and Canada, finally retiring together in Winnipeg, Manitoba to be close to family and friends. She was predeceased by her parents Arelius (Arli) Isfeld and Steinunn (Steina) Isfeld nee Jonsson, and her brother Brian and sister-in-law Carol Isfeld of Comox, British Columbia. Patricia is survived by her husband Brian and her two sons and their families, Donald and Lee Ann and their children Connor and Lauren of Winnipeg, Manitoba and Cameron and Cendra and their children Jordan and Matthew of Montreal, Quebec. She will also be missed by her cousin Wilbur Jonsson of Montreal, cousins and extended family. Pat had a special place in her heart for her daughters-in-law Lee Ann and Cendra and always enjoyed immensely their relationships and cherished their time together. We will be forever grateful for the friendship and love given to Pat by her niece and good friend Cathy McElhoes who was a tremendous support to her during her illness. Her family was her life and she loved to give of herself to them. She will be missed by those she has left behind. Rest in Peace Mama. She was very thankful for the support of her family physician Dr. Gwozdecki as well as the staff at CancerCare Manitoba, in particular Dr. E. Rimmer whose compassionate and effective treatment allowed her to be with her family up until the very end. At her request there will not be a service and donations in lieu of flowers can be made in her memory to CancerCare Manitoba.