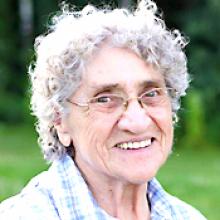 JANET BERNICE (FINGLER) COOK September 13, 1932 - August 18, 2015. It is with heavy hearts we announce the passing of Janet Bernice (Fingler) Cook. Janet is survived by her children Debra Lennon, Darcel (Darrell) Gottfried, Richard (Madelaine) Cook, Denise Martens, Donna (John) Repay, Barbara (Anthony) Plant, Sandra (Kevin) Cook, as well as many grandchildren and great-grandchildren. Also surviving are her siblings Wilma Joss, Ron (Maureen) Fingler, Jean Bedard, as well as numerous nieces and nephews. Janet was predeceased by Wilfred Charles Cook, her parents William and Caroline Fingler, siblings Doris Smith, Harvey and Robert Fingler and son-in-law Larry Martens. A Celebration of Janet's life will be announced at a later date. In lieu of flowers, donations in memory of Janet may be made to the Canadian Cancer Society, 415-1st Street, Brandon, MB, R7A 2W8. I hear babies cry, I watch them grow, They'll learn much more, Than I'll ever know. And I think to myself, What a wonderful world. Love you Mom. Messages of condolence may be placed at www.brockiedonovan.com. Arrangements are in care of Brockie Donovan Funeral & Cremation Services, Brandon, (204) 727-0694.