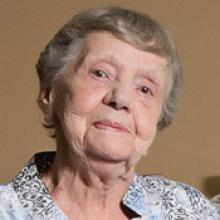 MARION COVE MORDEN FINES Marion Cove Morden Fines was born on May 7, 1920 in Brandon, Manitoba, the eldest child of Ernest and Edith Cove. In 1932, the family moved to Winnipeg where Marion spent the rest of her youth. Marion's first job was at the Winnipeg Public Library. It was here that she met her first husband Charles Clemo Morden and they were married in 1940. The war years brought the birth of her first two children, Lynn and Charlene. After receiving his degree, Charlie became the principal of the school at Fort Churchill, and Marion and the girls joined him there. When Charlie drowned in a fishing accident on the Churchill River in 1955, Marion was expecting her third child, Lois. She returned to her childhood home and mother in Winnipeg. Once she had returned to the library to work, she bought a house on Ashburn Street taking her daughters and mother with her. Both her mother and her future husband were active politically and this is how she met her second husband, Gordon Richard Fines. They married and two years later their son Rae was born. The next years were spent bringing up her blended family and participating in community and political life. Marion's greatest focus was always her husband and children, and she became Nanna to her grandchildren as they arrived. When Gordon died in 1990, Marion moved to Vancouver Island to be closer to her daughters. She succeeded in making this transition gracefully as she had done all things in her life and her grandchildren and great-grandchildren now became her interest, as well as playing cards with friends, bowling, walking, yoga, tai chi and needlework. In her later years, she moved to Casa Loma and spent quiet years there enjoying sports on TV, reading, visiting friends and as many visits with her beloved family as she could have. Marion died quietly in Comox, BC on August 28, 2015. Marion is leaving behind to miss her: daughter Lynn Lewis (Wally), granddaughter Jo-Anne Roosen (Derrick Stebbling), great-grandchildren, Danika and Noah, grandson Bruce Roosen (Carolyn), great-grandchildren, Kate and Medius; daughter Charlene Wadelius (Leif), granddaughter Lisa McPherson (Doug), great-granddaughters, Victoria and Amber, granddaughter Lara Kirkpatrick (Scott), granddaughter Lori Gelson; daughter Lois Johnson, granddaughter Gillian Cartwright (Phyl); son Rae Fines, granddaughters, Megan and Tayla, and grandson Rylee. Many of Marion's nieces and nephews fondly remember family dinners at Strathcona Street and have remained close to her in her later years. She is predeceased by: husbands, Charles Morden and Gordon Fines; sisters, Mona Dixon, Muriel Friesen, Marjorie Bond Walton, Marie Peters and brothers, Douglas MacKinnon Cove and James Milton Cove; and grandson Bryan Roosen. At Marion's request, there will be no service.