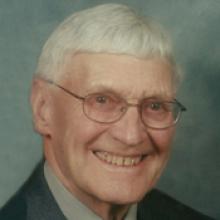 WM. T. EDWARD LAING February 16, 1921 - September 11, 2015 On Friday, September 11, 2015, Edward passed away peacefully at the age of 94. He is survived by: his loving wife Alice (nee Keith); children: Louise Fenwick, Ray (Bertha) Laing, and Valerie Laing (Ed Stechly); grandchildren: Blake Laing (Helen Wiens-Laing), Taryn Fenwick Taylor (Kyle Taylor), Ted Laing, and Tyrone Laing; great-grandchildren: Alex and Isabella Wiens-Laing; and sister Phyllis Ireland. Edward was the only son of William and Mary Laing and was predeceased by sisters: Jenny Sproule, Isabelle Boal, Margaret Kreutzer; and son-in-law Ron Fenwick. Ed was born on the Laing family farm in Clearsprings during a record breaking snowstorm. Ed, growing up on the family farm with his parents and four sisters, experienced milking cows by hand, working the fields with horses and harvesting with the old threshing machines. He was 16 when the first tractor showed up in 1937. This was the first of many changes and improvements on the farm over the years. Ed met Alice Keith, then the school teacher in neighbouring Ridgewood School, in the summer of 1943 at the Clearsprings United Church picnic. After enjoying each other's company for the next two years, they were married on November 10, 1945 and still enjoyed each other's company after 69 years of marriage. Ed and Alice took over the family farm when Ed's parents retired to Steinbach in 1953. As well as operating a successful dairy farm, he was active in community organizations. He was a long time trustee in the Clearsprings School district as well as the Steinbach United Church and a board member of both the Hanover Agriculture Society and the Hanover Breeders Association. His pride and joy was looking after the Clearsprings Cemetery. Ed and Alice retired from farming in 1980 when they turned the family farm over to the next generation. During their retirement, they travelled extensively: in Canada from the east to the west coast; in the USA from Alaska to Hawaii and many points in between; as well as a history research trip to Scotland. A highlight in their life together was the publishing of the "Pioneers of Clearsprings" history book in 2001 and "The Great Farming Country of Otterburne West" in 2006. The family would like to thank Dr. Nicole Porath of Steinbach Family Medical for her kind and compassionate care. A celebration of Ed's life will be held on Wednesday, September 16, 2015 at 11:00 a.m. at Birchwood Funeral Chapel, 162 Hwy. 52W, Steinbach, MB. Service by Rev. George Feenstra, Steinbach United Church. Ash interment in Clearsprings Cemetery at a later date. In lieu of flowers, friends are invited to make charitable donations to Clearsprings Cemetery, P.O. Box 494, Steinbach, MB R5G 1M3. Arrangements by BIRCHWOOD FUNERAL CHAPEL 1-204-346-1030 OR 1-888-454-1030