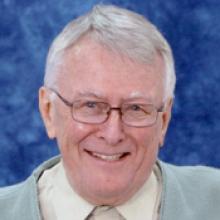 STANLEY JAMES (JIM) BAKER April 30, 1935 - September 15, 2015 Jim Baker passed away September 15, 2015 at the Tri Lake Health Centre in Killarney, Manitoba at the age of 80. Jim was predeceased by his father Cyril, mother Jessie, and half sister Jean. He is survived by his brother John, wife Sylvia and nieces, Tanis (Daniel), Okotoks, AB and Janelle (Adam), Steinbach, MB. He enjoyed sharing stories with his grandnieces and nephews. Jim was born in Teulon, MB, moved to Winnipeg for a short while and finally to Killarney, MB where he completed his education, after which he started working with his father in the insurance business. At 17 Jim moved to Winnipeg working for a large insurance company. After a short stay in Winnipeg he returned to Killarney and continued working with his father at Baker Agencies. Following Cyril's death in 1964, Jim took over the business (with his mother's help). In 1983 Jim sold the business to David Jones which allowed him to spend more time at his winter retreat in Palm Springs. After many enjoyable years in Palm Springs, ill health forced Jim to curtail these activities and remain in Killarney. Jim was resilient in his numerous trips to the hospital in the last several years which showed his strong will and determination. Thank you to the doctors and staff at Killarney Tri Lake Health Centre as well as friends and neighbours for the care and attention they gave Jim. A celebration of life will be held at 2:00 p.m. on Friday, September 25 at Holy Trinity Anglican Church in Killarney, Manitoba with Rev. Lawrence Smith officiating. Interment will follow at the Killarney Cemetery, Killarney, Manitoba. In lieu of flowers, donations in memory of Jim may be made to Lakeland Regional Library, Box 970, Killarney, Manitoba, R0K 1G0. Messages of condolence may be made online at www.wheatlandfs.com Wheatland Funeral Service 204-523-7791 - www.wheatlandfs.com