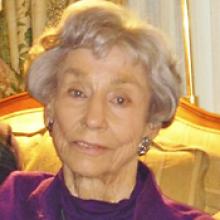 MARION (JOAN) JESSIMAN (nee PERRIN) December 21, 1924 - September 24, 2015 After sustaining a broken hip with ensuing complications, Joan passed away in the afternoon of September 24, 2015. Joan was surrounded by family members continuously during her last few days and passed away peacefully in the end. Joan is survived by her two sons, Duncan (Colleen) and Robert (Sally); and her daughter Sally Jessiman. Joan's grandchildren are: Duncan (Tressa), Patrick (Alexis) and Shauna (David); Ryann, Scott and Robin; and Joe and Julia. They will miss her dearly, as will Joan's nine great-grandchildren. Joan is predeceased by her father John D. Perrin and her mother Ruth Perrin, as well as her brother Jack and sisters, Alix and Sally. She will be with other family members at St. John's Cathedral Cemetery. Joan is best remembered as a "classy gal" who loved figure skating, diving and golfing, all of which she excelled in, primarily at the Winnipeg Winter Club and St. Charles Country Club. She loved the peace and depth of nature, which she most enjoyed at Lake of the Woods, West Hawk Lake, Palm Springs and the slopes of the mountains in Banff. She was a true sun seeker in each of these locations and in all of our families lives. Joan had a great depth and strength, which her many family members appreciate. Hopefully we can emulate her example. Special thanks to Dorina, who assisted Joan in so many ways during her last years residing at The Wellington. A reception for family and friends will take place at The Wellington, 3161 Grant Ave. between 2:00 p.m. and 4:00 p.m. Saturday, October 3, 2015. A small (private) family service will be held in the chapel at St. George's Church prior to interment. In lieu of flowers, please make donations to: Child Haven International, 19014 Concession 7 RR1, Maxville, ON K0C 1T0.