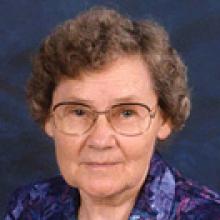 HELEN LETKEMANN August 1, 1923 - October 4, 2015 Helen passed away peacefully, with family by her side at Boundary Trails Health Centre at the age of 92 years. She is survived by three sisters-in-law and one brother-in-law: Margaret Letkeman (Frank), Tina Letkemann (Jake), and Lyn (Abe) Voth (Henry Letkemann), as well as many nieces, nephews and their families. She was predeceased by her father Franz (1986), mother Katarina (Kroeker) (1993), sister Tina Letkeman (2000), brothers Henry (1968), Frank (2006), and Jake (2011). Helen was born in Germany and moved to Manitoba with her family in August of 1923. The family settled in Greenland, MB, near St. Anne and later moved to Roseisle and then the Graysville area. In 1944, Helen moved to Waterloo, ON to work in an orphanage. In 1945, she moved to Kitchener, ON and worked at an MCC clothing Depot. In 1957, Helen came back to Manitoba and began classes which later led to her education degree and teaching career. Helen graduated from teacher's college in 1959 and began her teaching career at Blumenort School, near Steinbach, MB. In 1967, she began teaching at the Lowe Farm School and taught there until 1984, when she retired. In 1986 after her father's passing, she moved back to Winkler to live with her mother. After her retirement, she spent some time teaching adult English classes as well as substitute teaching in Winkler and Lowe Farm. She was a member of the Winkler Bergthaler Mennonite Church for many years and served in countless ways, including years of Sunday School teaching and deaconess. She led a rich prayer life and many have benefited from her prayers. She volunteered many hours with the hospital auxiliary and spent many hours visiting people in homes, hospitals, and personal care homes. Her passion in life was to live for Jesus and do whatever she could to ensure all she met and loved would one day live with Him in Paradise. She loved her family dearly and we'll miss her faithful prayers, caring, birthday and anniversary phone calls and so much more. A special thanks to the Boundary Trails Health Centre Palliative Care Unit, Dr. Cornie Woelk and staff for their compassionate care. Special thanks to the many friends and family who faithfully visited, called, encouraged and uplifted Helen. Your visits were her music. Viewing will be from 1:00 p.m. until 6:00 p.m. on Thursday at Wiebe Funeral Home, 121 - 8th St. in Winkler and at the church prior to the service. Funeral service will take place at 2:00 p.m. on Friday, October 9, 2015 at the Winkler Bergthaler Mennonite Church, 252 - 6th Street. In lieu of flowers, donations may be made in Helen's memory to either to Mennonite Central Committee, 134 Plaza Dr., Winnipeg, MB R3T 5K9 or Boundary Trails Health Centre Palliative Care Unit, Box 2000, Winkler, MB R6W 1H8. Wiebe Funeral Homes Ltd. In care of arrangements, 204-325-4201 wiebefuneralhomes.com