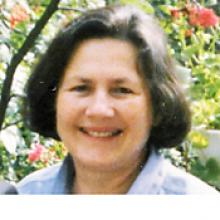 CARLA EDITH MOORE 1935 - 2014 In memory of Carla Edith Moore, who passed away October 11, 2014. Carla is greatly missed by daughters Alexandra and Jennifer Rattray, Jennifer's husband Stacy Dainard and her beloved grandson, Tristan Dainard, as well as the many friends she made at every stage of life. Carla lived with enthusiasm and energy. She believed deeply in social justice, was a committed feminist, passionate about politics, Canada and her family. She participated fully in the community of the First Unitarian Universalist Church of Winnipeg, and volunteered over the years with Winnipeg Harvest, Prairie Theatre Exchange, the Fringe Festival, the Salvation Army's literacy program, various parent councils, and the North American Indigenous Games and Pan Am Games. Carla took joy in her friendships old and new, and often said she did not know how she ever managed to fit in a career as an art curator and then reference and legal librarian when there was so much to do in retirement. But what she loved most was being a grandmother and helping to raise her grandson. Carla was adventurous, and in addition to a decade living in New England she spent extended time in Scotland exploring her Scottish roots, and also in Australia and New Zealand, Tahiti and other hot spots, and most parts of Europe. She also took significant trips, one to Italy to lay flowers on the grave of her uncle who died at the Battle of Monte Cassino, and another to the site of the former Brandon Indian Residential School to pay respects to two uncles who died there as children. Carla was a strong believer in the power of education. In midlife, working and raising her children, she went back to school to earn a diploma at Red River College followed by a degree at The University of Winnipeg. Her family would like to extend their gratitude for donations made to The Carla Moore Award through The University of Winnipeg Foundation. Carla was a proud member of Peepeekisis First Nation with roots in Fisher River, Norway House and Oxford House, and the annual endowed award helps an Indigenous student in financial need and is a tribute to everything Carla believed in. We miss her deeply as we mark the first anniversary of her passing. When death's dark stream I ferry o'er, A time that surely shall come; In Heaven itself, I'll ask no more, Than just a Highland welcome. Robert Burns