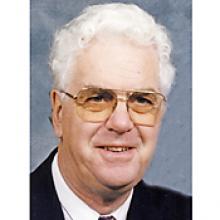 JOHN LEWIS NEABEL November 6, 1937 - October 14, 2015 John Lewis Neabel passed away on Wednesday, October 14, 2015, at Minnedosa Hospital. John Neabel grew up on a farm two miles east of Forrest, and graduated from Turrif school. John enrolled in the Faculty of Agriculture at the University of Manitoba. On graduation, he was hired by the Manitoba Department of Agriculture. John had a successful career working in various positions and in several communities in Manitoba, including Shoal Lake, Roblin, Killarney, Brandon and Minnedosa. While he was "Ag Rep" at Shoal Lake, John helped some students form the first Pony or Horse 4H Club in Manitoba. John married Lois Emmond, a Home Economist in the Department of Agriculture. Wherever they lived, John always took part in the community, service groups, organizations and projects. John had many other interests (beyond work) including farming, woodworking, and gardening. John will be missed by his wife Lois; daughters, Maureen Neabel (Paul Clark) and Brenda Neabel Turbett (Ken Turbett); four grandsons, Linden Clark, Graham Turbett (Kiara Turbett), Rowan Clark, Garett Turbett; sister Beth Lee (Craig Lee) and friends. The grandboys enjoyed playing crokinole and taking long walks with Grandpa. A funeral service for John Neabel will be held Saturday, October 24, 2015 at the Minnedosa United Church, 48 Main St. S., Minnedosa. Donations in memory of John Neabel may be made to the Minnedosa 50+ Activity Centre, or the Minnedosa Rotary Club, Minnedosa, MB. R0J 1E0. Minnedosa Funeral Service in care of arrangements.