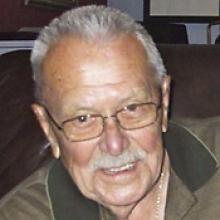 ROBERT J. DYCK 1931 - 2015 It is with deep sadness the family of Robert J. Dyck, of Morden, Manitoba, announces his passing on Wednesday, October 14, 2015, at St. Boniface Hospital in Winnipeg, at the age of 84. Bob was born June 24, 1931, in Plum Coulee, Manitoba, the second of three children born to Peter H. and Maria Dyck. Bob was predeceased by his wife, Anne in 2007, his parents, and his sister, Annie. Bob was also predeceased by his in-laws, John and Anna Martens, brothers-in-law, Johnny Martens and Bob Martens, and sister-in-law, Tina Friesen. He will be forever loved and missed by his daughter, Lori (Dwaine) Fedak, his beloved grandchildren, Courtney (Jarrett) Tupper and Brennan (Miranda) Fedak, and his greatest pride and joy, great-grandsons, Declan and Ronan Tupper. Bob is also survived by his brother, Norm and sister-in-law, Shirley Dyck, sisters-in-law, Helen Kinloch, Sara Enns and Frieda (Art) Wiebe, and brother-in-law, Jim (Jude) Martens, plus numerous nieces, nephews and cousins. In lieu of flowers, donations may be made in Bob's memory to the Heart and Stroke Association of Manitoba. There will be no service as per Bob's wishes. Private family interment at the Gretna Cemetery. Wiebe Funeral Home, Winkler In care of arrangements, 204-325-4201 wiebefuneralhomes.com