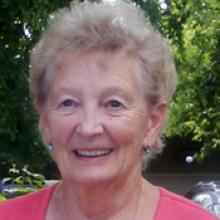 ANNA MAE BEATTY (ASHCROFT) It is with great sadness that we announce the passing of Anne Beatty on Monday, October 12, 2015. A dear wife of 57 years to Wes as well as a mother and grandmother. She will be greatly missed by Wes and her children Stacey, Darrel (Rae), grandsons Shane, Lyndel and Devon, sisters, Maxine, Doreen and Linda, as well as many nieces and nephews. Anne was born August 9, 1938 at Antler, SK, the eldest daughter of Cecil and Jennie Ashcroft. She grew up and received her education in Tilston, Manitoba. At the age of 16, she went to Brandon and secured a position working in a restaurant during the days and attending college in the evening. During this time, she met and married Wes Beatty on July 5, 1958. They settled on Whitehead Crescent where they raised their family. Anne and Wes built a cabin at Oak Lake beach and spent many enjoyable years with their family, friends and neighbours. While in Brandon, Anne was active in the Valleyview Community Centre, Brandon Ladies Shrine Club, Brandon Car patrol and Shrine Circus. Anne was one of the office managers at GT Smith and Sons for many years. Wes and Anne had a winter home in Edinburg, Texas where they spent many warmer winters. They also went on trips to the Caribbean, Alaska, Venezuela, Churchill, Victoria and many other places throughout the USA. The family wishes to thank the staff at the Brandon Regional Health Centre, Fairview Personal Care Home and the Riverview Health Centre in Winnipeg for her care. A Memorial Service will be held at the Brockie Donovan Chapel, 332-8th Street, Brandon, Manitoba on Tuesday, October 20, 2015 at 1:00 p.m. A private family graveside service will be held at Oak Lake Cemetery at a later date. In lieu of flowers, donations in Anne's memory may be made to the Alzheimer Society of Manitoba or to a charity of your choice. Messages of condolence may be placed at www.brockiedonovan.com Arrangements are in care of Brockie Donovan Funeral & Cremation Services, Brandon, MB, (204) 727-0694.