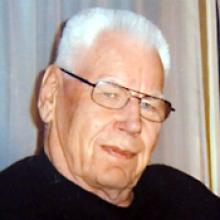 LLOYD CROSSLEY SKELDING Lloyd Crossley Skelding, of Winnipeg Manitoba, died peacefully on Sunday, October 18, 2015 at the Health Sciences Centre at the age of 84. He was born on February 15, 1931 in Eriksdale, Manitoba to Martha Helena (Lundquist) and Ernest (Toss) Skelding. He married Moira Anne Eagle on December 18, 1971, and together they had one child, Andrew Crossley Skelding in 1977. Lloyd is survived by his beloved wife, Moira; son, Andrew Skelding (Chrissy) and sister, Joan Simmons (Bob) along with four grandchildren, Mallory, Mathew, Liza and Ava and loving nieces and nephews. Lloyd was predeceased by his mother Martha Helena Skelding, father Ernest Skelding and grandson, Mark Crossley Skelding. Lloyd spent his early days working on the family farm until he moved to Winnipeg to pursue a career in aircraft mechanics. Throughout Lloyd's career he spent many years working for Standard Aero, Perimeter Airlines and then retiring from Canadian National Railway in 1995. A unique caring soul, Lloyd enjoyed helping others where he could by fixing cars and helping to correct other mechanical issues wherever he could find them. Lloyd loved music and spent a lot of time with his guitar. He played in bands from his early 20's right through into his 80's. Lloyd also loved to tell stories and could gather quite an audience when he would relive old memories from the farm. When he could, Lloyd also enjoyed fishing and hunting, where the best of his stories were written. Lloyd volunteered with Scouts Canada for many years with his son Andrew. They enjoyed many family adventures together including winter survival camps, canoe trips, camping in the Black Hills and trips to San Antonio, Texas. He will be greatly missed. Lloyd was an active member of the Winnipeg South Osborne Legion 252, serving on the Color Party and many other committees, volunteering his time in many different ways by helping maintain the building and helping others in need. Legion tribute will be held on Friday, October 23, 2015 at 1:00 p.m. at the Winnipeg South Osborne Legion 252 at 420 Osborne Street. Richard Wojcik of Wojcik's Funeral Chapel, 1020 Main Street, Winnipeg, MB in care of arrangements 204.586.8668. For those who wish to sign Wojcik's online Guest Book please visit our website at www.wojciksfuneralchapel.com Branch No. 252
Publish Date: Oct 21, 2015