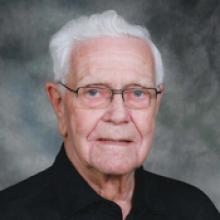 LLOYD ROSS TOPLEY August 30, 1931 - October 23, 2015 It is with deep sadness that we announce the passing of Ross Topley, aged 84, at the Boundary Trails Health Centre Palliative Care Ward on Friday, October 23, 2015 after a lengthy struggle with cancer. He will be lovingly remembered by his wife, Dorothy, after 63 years of marriage; his son, Stuart (Brenda) and their children, Erin, Carly (Jason) and Duncan (Ashley); his daughter, Patty (Albert) Dyck and their children, Scott and Brianne. Ross grew up on a farm north of Morden. During his high school years he was an avid curler winning the Canadian High School Curling Championship in 1948. Following high school, he continued his love of curling as well as golfing. Ross was very active in the community serving as a volunteer for many different roles; member of the St. Paul's United Church Board, volunteer fireman for 28 years, treasurer for the International Golf Tournament for 18 years, member of the Elks - winning Elk of the Year in the 1970s, as well as member of the Legion. Ross was always willing to help family and friends and loved watching his grandchildren's extracurricular activities. Cremation has taken place. Memorial service will be held at 1:30 p.m. on Tuesday, October 27, 2015 at St. Paul's United Church, 353 Thornhill St. in Morden. Ross and Dorothy have a wonderful group of close friends who helped out during his illness. The family would like to thank all of you for the love and support over this difficult time. Special thanks to Dr. Bob Menzies and the Palliative Care team at Boundary Trails Health Centre for your compassion and caring. In lieu of flowers, donations can be made to Boundary Trails Health Centre Palliative Care or a charity of your choice. Wiebe Funeral Chapel, Morden In care of arrangements, 204-822-4755 wiebefuneralhomes.com