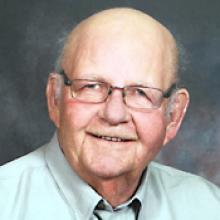 ALAN SCHADE Peacefully on Wednesday, October 28, 2015, Alan Schade passed away with his family by his side at the Victoria General Hospital, Winnipeg, MB. Funeral service will be held at the Trinity Lutheran Church in Starbuck, MB on Tuesday, November 3, 2015 at 2:00 p.m. with the Pastor Ron Vert officiating. Interment will follow in the Starbuck Municipal Cemetery. Alan was predeceased by his mother and father, Mary and Otto Schade and brother-in-law Rene Lavigne. He will be sadly missed and lovingly remembered by his beloved wife of 50 years, Del; three children, Vince (Jaunty), Cheryl (Dan) and Pat (Gladys); seven grandchildren, Eric, Ashley, Candy, Tyler, Terilyn (Mitchell), Stevie-Ray and Alex (Josh); three great-grandchildren, Ryder, Azreal and Riven; his three siblings, Edna Lavigne, Mildred Shirtliff (Bob) and Leonard (Gail); as well as numerous nieces, nephews and extended family. Alan was born October 13, 1940 in Winnipeg, MB and was raised on the farm in Starbuck, where he remained and proudly raised his own family. He worked diligently on his farm with his father for many years before becoming a heavy-equipment operator for the Rural Municipality of MacDonald until his retirement in 2003. Alan worked tirelessly and volunteered countless hours for a number of years at the Starbuck Recreational Centre. His pride and joy were his grandchildren and during his retirement years his most enjoyable times were spent with them, fishing, camping and puttering around the farm. The family would like to extend their sincere appreciation to the special staff of CancerCare Manitoba and the Victoria General Hospital for their care and compassion during Papa's illness. Should friends and family so wish, Papa has asked that in lieu of flowers, donations be made to CancerCare Manitoba. There will always be heartache, And often a silent tear, But always precious memories, Of the days we had you here, We will hold you close within our hearts, And there you will remain, To walk with us throughout our lives, Until we meet again. Big Papa, we give back to you, your Alan. Adam's Funeral Home of Notre Dame de Lourdes, Manitoba in care of arrangements. Phone 1-888-400-2326. www.afh.ca