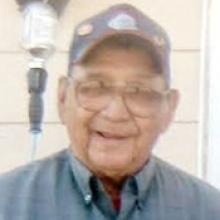 LAWRENCE (HAPPY) SMITH (Hole in the Cloud) March 13, 1927 - October 28, 2015 It is with great sadness that the family announce the passing of Lawrence Happy Smith. Lawrence leaves behind to mourn his passing his wife of 61 years Sarah Mina, his sons and daughters Raymond, Beverly, Carl, Clarence, Marvin, Glenda, Gerald, Marlene, Kelvin, Deborah, Wendell, Emery and grandson Lawrence Menow. Lawrence also leaves also to mourn his 27 grandchildren and 34 great-grandchildren, his nieces and nephews, great nieces and nephews and numerous cousins and friends throughout Turtle Island. Lawrence was a commercial fisherman on Lake Winnipeg for over 65 years and had a strong spiritual connection to the lake and often shared his harvest with family and community members alike. He also believed strongly in self-governance and strong political leadership that would lead to the advancement of his community and all First Nations; he served as a Band Councillor at the Brokenhead Ojibway Nation for several terms between 1966-1979 and remained actively involved in the political area and served as an Elder for several First Nations political organizations. Lawrence also valued education and served as a school trustee with the Lord Selkirk School Division from 1971-1989. Lawrence was predeceased by his parents Henry and Armeline (Guimond); sister Verna (Grisdale/ Wells); brother Gus; niece Virginia and nephews Nick, Lawrence, Vernon and Eugene and Kevin. Wake service will be held on Sunday, November 1, 2015 at the Private Tom Chief Community Hall in Scanterbury at 4:00 p.m. Funeral Services will be held on Monday, November 2 at 1:00 p.m. also at the Private Tommy Chief Community Hall in Scanterbury, Manitoba. The family wishes to thank the doctors, nursing staff and support staff of the Selkirk and District General Hospital who took care of dad with compassion and understanding. Also thanks to the Brokenhead Ojibway Nation. "Our husband and our father will always be with us and your love will always guide us as we journey on." Gilbart Funeral Home, Selkirk in care of arrangements. www.gilbartfuneralhome.com