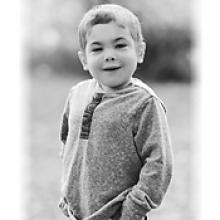 KELLAN GORDON JOSEPH PRYOR December 25, 2010 - October 30, 2015 It is with extremely heavy hearts that the family of Kellan Gordon Joseph Pryor announce his passing on October 30, 2015, in his parent's arms, at P.I.C.U., Children's Hospital in Winnipeg, MB. Kellan is lovingly remembered by his parents Justin and Kaylene, sister Whitley, as well as grandparents Randy and Susan Pryor, Ray and Marilyn Brunel. Funeral Services will be held on Friday, November 6, 2015 at Cornerstone Ministries Church in Crystal City, Manitoba at 2:00 p.m. with Emily Lovell officiating. Private Interment will take place at the Crystal City Cemetery, Crystal City, Manitoba. Donations in memory of Kellan may be made to the Children's Hospital Foundation of Manitoba, CE501-840 Sherbrook St., Winnipeg, MB R3A 1S1, or to Canadian Blood Services, 777 William Ave., Winnipeg, MB R3E 3R4. Messages of condolence may be made online at: www.wheatlandfs.com "Your wings were ready but our hearts were not." Wheatland Funeral Service (204) 825-2848 - www.wheatlandfs.com