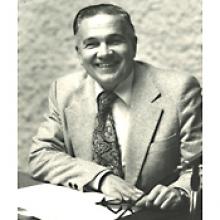 GEORGE WATERS In sadness the family of George Waters announces his passing at Grace Hospital in Winnipeg on October 31, 2015. George was predeceased by his wife Constance in 1997, his father John George in 1919, his mother Margaret Ann Miller in 1971, and his sister Betty in 2011. He is survived by his children John, Ann (Wolfgang), Isobel (Grant), Bruce (Carol), Gordon (Linda), and Frances; his grandchildren Scott, Jen (Jeff), Matthew, Susan, Lindsay (Sean), Meghan (Christopher), and David; and his great-grandchild Félix. George was born in Winnipeg on July 1, 1919. When he was only six weeks old, his father drowned at Grand Beach. He grew up in Winnipeg's West End and never forgot the support and kindness he and his family received from charities and community groups like the Salvation Army in the 1920s and 1930s. Upon completing high school at Daniel McIntyre Collegiate, George began working to help support his mother and sister. In 1941 George enlisted in the R.C.A.F. and served through the Second World War, for most of that time on R.C.A.F. Bomber Command bases in Yorkshire. It was there that he met his future wife, Constance, who was in the British Women's Auxiliary Air Force of the R.A.F., and they were married in Liverpool in December 1944. Following the war, George and Connie settled in Winnipeg and raised a family of six children. From 1946 through the early 1960s, George worked in sales and management positions in the life insurance, food import, and candy production businesses. During that period he was active in the R.C.A.F. Auxiliary (Winnipeg), primarily as the Commanding Officer of the Recruiting Unit. From 1962, he worked for 23 years with the Federal Department of Veterans' Affairs as the Personnel Director of Deer Lodge Hospital in St. James. George retired in 1985. George was very committed to serving his community, particularly with respect to education. For 18 years he was a School Trustee for the St. James-Assiniboia School Division and served as the chair of the School Board and its various committees. Throughout his career, George championed programs providing opportunities for students, including the St. James Scholarship Foundation and the Work Experience Program for Special Education students. In the 1990s he and Connie helped establish the Laureate Academy, a private school for students with learning disabilities. He participated in many other community activities, including the United Nations Association, the Royal Aviation Museum of Western Canada, the Assiniboia Chamber of Commerce, and the publication and sale of Paths to Freedom, the wartime memoir of his friend Bob Kellow. For his considerable community service, George received many awards, including the Queen Elizabeth II Silver Jubilee and Diamond Jubilee Medals and the 125th Anniversary of Confederation of Canada Medal, and was the only Honorary Lifetime Member of the Assiniboia Chamber of Commerce. Perhaps the honour that pleased him the most was the naming of the George Waters Middle School in St. James. George will be remembered by his family for many things, including his sweet tooth that made Peek Frean's cookies, Werther's candies, and Welch's grape juice constants in his life. His frequently told stories of growing up in Winnipeg almost 100 years ago, of wartime in England, and of his many work and public roles will be part of the family for many years to come. The family is deeply appreciative and grateful to Dr. Christina Winogrodzka, to Dr. Macek and the healthcare staff of Grace Hospital's 5 North Ward and Emergency Department, and to Misericordia Health Centre's Urgent Care for their care of and kindness to George during his final years. A service of remembrance will be held on Tuesday, November 10, 2015, at 2:00 p.m. at Chapel Lawn Funeral Home, 4000 Portage Avenue in Winnipeg. A reception will be held in the Chapel Lawn Reception Centre following the service. Cremation has taken place. In lieu of flowers, donations in George's memory may be made to the St. James Scholarship Foundation (Constance Waters Fund), 2574 Portage Avenue, Winnipeg, MB R3J 0H8 or to a charity of one's choice. For those who wish to sign the online Guest Book please visit our website. Chapel Lawn www.chapellawn.ca 204-885-9715