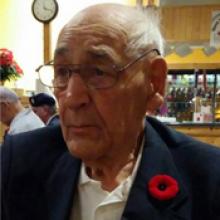 ALBERT PEARSON 1922 - 2015 Albert left us peacefully on November 15, 2015 at Deer Lodge Hospital in Winnipeg. He was predeceased by his wife Emma (Ball), parents Joseph and Clothilde (Boiteau) Pearson, brothers Emile, Louie, Leonard, and Phil, and sister Theresa (McLaren). He is survived by his three children Wendy (Wayne) Kennedy, Susan (Don) O'Brien, and David (Theresa); grandchildren Nancy, Chilina, Tyler, Meghan, Nicole, and Geoffrey; seven great-grandchildren; sister Lucille (Altvater), and brother Henry. Albert, or for many Bert, was a lifelong Eaton's delivery driver on St. Vital routes, where for most of his life he also resided, on Humboldt Avenue. He was also a veteran and a Life Member of the Royal Canadian Legion. Cremation has taken place and no formal memorial service will be held in following with Albert's wishes. Bardal Funeral Home 843 Sherbrook Ave., 204-774-7474 Condolences www.bardal.ca