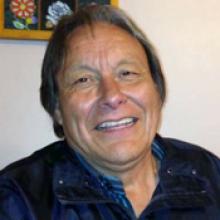 EDWIN JOHN TWOHEART Zhoongi Ma'iigan December 31, 1954 - November 19, 2015 It is with heavy hearts, the family of Edwin John Twoheart "Shigun", announce his sudden passing, our brother, father, grandfather, great-grandfather and beloved friend. Edwin leaves to cherish his memory his children, Erica (Jerry), Robin (Dinelle), and John Boy of Sagkeeng, Carmen (Mao), Chrissy (Neil) and Bradley of Winnipeg and Jordy (Lawrence) of Hazelton, BC; brothers Adolph (Catherine), Benjamin (Patricia) and Harold of Sagkeeng and Eric (Cathy) of Winnipeg; sisters Rita (Harold), Sara, Mabel (Jeffery) and Claudette (Reinie) of Sagkeeng, Darlene of Winnipeg and Sally (Ron) of Ontario; his partner for over 20 years Ardythe Wilson of Hazelton, BC; numerous brothers-in-law, sisters-in-law and friends from BC, numerous grandchildren, nephews, nieces and many lifelong friends. Edwin was predeceased by his youngest daughter Emmy Lee, great-granddaughter Emmarie, his father Willy; mother Dora; brothers Wallace, Larry, Stanley, adopted brothers Harry and Lee; sisters Evelyn, Elaine and Sybil; stepfather J.B. and his first wife Barbara. Edwin had friends throughout Canada. He was passionate about his culture and created some beautiful artworks dedicated to preserving his beliefs and practices as a Sun Dancer. His works of art have been given to highly regarded dignitaries. He loved to hunt and fish, especially B.C. Salmon. He loved his family dearly, and will always be remembered by all he touched. His laughter and smile is embedded in our hearts and memories. The family would also like to thank Compassionate Friends for their support and the doctors and nursing staff at the St. Boniface Hospital. Wake service is being held at the residence of Dinelle and Robin Courchene, 1252 Northshore Rd., Sagkeeng First Nation, MB until November 24, 2015. Funeral service will be held on November 24, 2015 at the St. Alexander Roman Catholic Church at 2:00 p.m. Interment will be held at a later date. Condolences may be sent to the family c/o Spirit Road Funeral Services Inc., PO Box 200, Fort Alexander, Manitoba, R0E 0P0, 204-340-6490 or friends may leave a message of sympathy at spiritroadfs@shaw.ca.