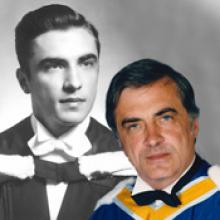 ROBERT BRUCE BARTEAUX B.Sc. (Pharm), B.A. (Spec.) (Gold Medallist) Passed away in his 74th year on Saturday, November 14, 2015, at Fairview Home with his loving wife, Karen, at his side after a long struggle with the aftereffects of a catastrophic stroke suffered on July 2, 1990. A loving father to Matthew (Poroshad Mahdi) and Hilary (Douglas Knight), and grandfather to Aryana, Callum and a brand new baby boy born on October 20, 2015. Predeceased by his brothers George (Ida) and Jack (Ruth) Barteaux. Survived by his brother Phil (Bev) Barteaux, sister Everald Pittendreigh, brother-in-law Dr. John Coates, and many nieces and nephews. Bruce was born in Birtle, Manitoba, to Orlando Tilson Barteaux and Clara Crew on February 28, 1942. He grew up on the family farm and, when he was of school age, his family moved into town. Bruce attended the University of Manitoba where he obtained a Bachelor of Science degree in Pharmacy in 1963 at the age of 21. He was awarded the Flexon Silver Medal for the highest standing in Organic Pharmaceutical Chemistry. Bruce then went to work as a pharmacist at Hargreaves' Drug Store in Neepawa, Manitoba. It was there that he met Karen Coates, the local public health nurse, at the curling rink. They were married in 1965 and, after travelling Europe and living in Souris for a time, where Bruce worked at Whitfield Drugs, they moved to Brandon, Manitoba in 1967. Ultimately, Bruce and his business partner, Wayne Couling, bought the Clinic Pharmacy and Brown's Drug Store in Brandon in 1972. Dedicated to his work and his clients, Bruce thrived professionally as a result of his kindness, his patience, his caring nature and his gentle character. Bruce was a man of deep faith, but also a man of science. He was innately curious and read widely and with great enthusiasm. Ultimately, his curiosity was such that he returned to university and earned a second degree, with great academic success, being awarded the Brandon University Silver Medal in Psychology and the Brandon University Gold Medal for the best performance in the four year Bachelor of Arts Specialist program at Brandon University. It was his ultimate intention to go on to pursue graduate studies but, as so often happens in life, he was confronted by the unexpected, his life became complicated and this goal was never realized. Napoleon Bonaparte said that it requires more courage to suffer than to die. Bruce did suffer, and he did so with great dignity and courage over the latter third of his life when, in 1990 at the age of 48, he suffered a stroke that resulted in devastating brain damage. For a person with such an intellectual bent, a man so devoted to the life of the mind, it was a cruel blow. Bruce was raised a Baptist, the Church of his mother, but most of his adult life was spent in the Anglican Communion. His faith was both his strength and his comfort when he endured the indignities of his broken body and mind. Bruce loved golf, boxing and the Montreal Canadiens. He and Karen travelled Europe a number of times and vacationed in Bermuda and Mexico. He spent countless hours hiking up and down the Birdtail River, where he took great pleasure in the family cottage and the proximity to nature it afforded. Following his illness, Bruce returned to the drawing and painting of his childhood and produced a voluminous number of paintings and sketches. He revelled in his grandchildren and family was both his comfort and his joy during his last days. The funeral was held on November 20, 2015, at St. Matthew's Cathedral in Brandon, Manitoba. The Very Rev. Nigel Packwood, the Right Rev. J. Njegovan and the Venerable Paul Curtis officiated. Donations may be made to the St. Matthew's Cathedral Memorial Fund or to the Heart and Stroke Foundation of Manitoba. Heartfelt thanks to Dr. J. Deong and all of the nurses and staff at Fairview Home. Messages of condolence may be placed at www.brockiedonovan.com Arrangements were in care of Brockie Donovan Funeral & Cremation Services, Brandon, MB, (204) 727-0694.