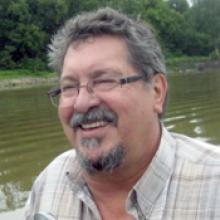 HALDEN IRA GOUDIE Halden Ira Goudie, of Winnipeg Manitoba, died peacefully on Saturday, November 28, 2015 at the Seven Oaks Hospital at the age of 64. He was born on January 2, 1951 in North West River, Labrador, to Margaret Goudie (nee Best), and Victor Goudie. He grew up in Happy Valley, Labrador, next door to the Mitsuks (Pauline's family). Halden is survived by his beloved wife, Pauline Mitsuk and her sons, Richard and Daniel Mitsuk Lavitt; siblings Deena Ramsay, Joan Millicent Goudie ONeill, Lloyd Goudie, Pat Goudie, Fred Goudie; daughters Kimberly Goudie (Only child of his marriage to Joan Willett (nee Best, no relation to mother), and her sons, Micheal Goudie, Nicholas Goudie, and Joshua Jordan, Dayna Goudie and her son, Ash Woodford, Stephanie Goudie, son Halden Goudie ll and his daughter Quinn Goudie, adopted daughter Chrissy Skelding, and her husband Andrew and their children Mallory Skelding, Mathew Skelding, Ava Skelding and Liza Skelding, adopted daughter Charlotte Van Wyk and her children, Skylar, Elizabeth, Alyssa and Russell Van Wyk as well as Daniel Coulter. He raised his granddaughter Skylar with Noreen Goudie (Chorney) as a daughter; Skylars children are Madison George, and Sophia MacCaull. Halden was predeceased by his parents, Victor, and Margaret Goudie; siblings, Bud Goudie, Bernie Goudie, and Elsie Goudie, as well as stepson, Donald Blake Jr (Pauline's son) and grandson Mark Skelding (Chrissy and Andrew's son). Halden spent his early days traveling throughout Canada and learning various trades, until he became a Plastics Technician at Boeing. Since retiring in 2012 he enjoyed a life of leisure, traveling with his wife, Pauline and spending time with family. Halden loved hunting, fishing and being out in nature. He was a skilled guitarist and loved to play and instruct others. To the small children's delight, he played guitar to entertain them. He will be greatly missed. A celebration of life will be held on December 10th, at 1:00 p.m. at the Churchill Park United Church (service by Minister Richard Mackenzie of the Spiritualist Fellowship Church of Manitoba), 525 Beresford Ave. at Nassau St. (1 block west of Osborne St. and 2 blocks north of Jubilee Ave.) Nick Knysh of Eternal Grace Funeral Chapel, 1111 Logan Avenue, in Winnipeg, MB, Phone 204-505-4559 in care of arrangements. For those who would like to sign the online guest book please visit our website at: http://www.eternalgracefunerals.com Eternal Grace Funerals 10-1111 Logan Ave Winnipeg, MB R3E 1R1 204-505-4559