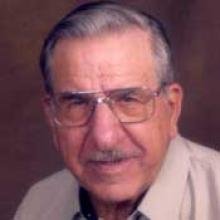 FREDERICK HILDEBRAND 1923 2015 On Monday, December 7, 2015 at his residence in Morden, MB Fred Hildebrand, aged 92 years formerly of the 1-6 district went to his eternal rest. Fred was born on April 19, 1923 on his mother's birthday, one of ten children in the 1-6 district. On September 13, 1952, Fred married Ella Staple and they farmed successfully for many years in the 1-6 district. He served on several boards; the most notable was the ACL board for over 35 years. Fred and Ella spent many weekends at Grand Forks and Miami at "Polka Parties" where they met many great friends. He leaves to mourn his passing his son, Brian (Norma) and daughters, Rhonda, Sandra (Bob), grandchildren, Kristen (Jared), Matt (Jen), Suzanne, Emma and great grandchildren, Jenalyn, Tarren and Hayley. He is survived by one sister, two brothers and many extended family members. He was predeceased by his wife, Ella in 2003. Viewing will be from 1:00 p.m. until 8:00 p.m. on Friday at Wiebe Funeral Chapel 1050 Thornhill St. in Morden. Funeral service will be held at 2:00 p.m. on Saturday, December 12, 2015 at St. Paul's United Church 353 Thornhill St. in Morden with interment to follow at Chapel Cemetery. If friends so desire, donations may be made in Fred's memory to Gateway Resources Box 1448 Winkler, MB R6W 4B4. Wiebe Funeral Chapel, Morden In care of arrangements, 204-822-4755 wiebefuneralhomes.com