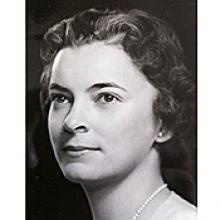 MARY ROBLIN (nee MACKAY) It is with great sadness that we announce the passing of Mary Roblin, who died on Friday, December 11, 2015 in Winnipeg, Manitoba. She was 86 years old. Mary was born in Montreal on July 16, 1929, the youngest child of Alice and Douglas Mackay, but spent most of her life in Winnipeg. She was predeceased by her brothers Shane and John Mackay and by her beloved husband Duff Roblin. Throughout her life Mary was full of laughter, generosity and love. She was a graduate of the University of Manitoba (BA) and subsequently, in the mid 1950s, worked at the Winnipeg Free Press as a reporter and at the CBC as a radio producer. It was at the CBC, while producing a political broadcast, that she met Duff Roblin. They were married in 1958 and were happily together for 51 years. Mary will be missed by all those who knew her. She is survived by her son Andrew, her daughter Jennifer and her grandchildren Lily and Rachel Roblin and Sian, Bronwen and Euan Lathrop. A funeral for Mary will be held at 2:00 p.m. Wednesday, December 16, 2015 at All Saints Church in Winnipeg, Manitoba. In lieu of flowers, please consider a donation to the Wii Chiiwaakanak Learning Centre through the University of Winnipeg Foundation.