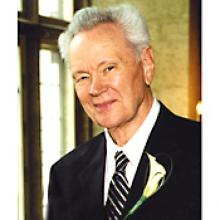 RUDOLF HANZ JANZEN 1931 - 2016 Rudy Janzen passed away peacefully at the Salem Home on Monday, January 4, 2016 after dealing with cancer in 2006 and dementia more recently. Rudy was predeceased by his parents, John J. Janzen in 1985 and Katharina (Dyck) Janzen in 1988, who emigrated from the Ukraine, and predeceased by his sister, Elly. Rudy will be greatly missed and lovingly remembered by his wife, Katy Janzen, and his children: son, Rick and Judy Janzen of Calgary, son, Harold and Lori Janzen of Morden, daughter, Heather and Marcel Tetrault of Winnipeg, four grandchildren, Christopher, Candice, David and Daniel of Calgary, and great-grandchild, Cedar. He is also survived by his brother, Menno and Nettie Janzen, brother-in-law, John J. Siemens, both of Winkler and many nieces, nephews and cousins. Rudy was a member of the Winkler Bergthaler Mennonite Church, where he was baptized in 1951. Rudy married Katy (Dyck) on July 19, 1953. They started their life together at their first home on 13th Street in Winkler. In 1964, they moved to 8th Street South, which became their permanent home where they resided until the spring of 2012, when they moved to Cedar Estates. There, Rudy and Katy spent a little more than a full year together, before Rudy was moved to the Salem Home in July 2013. Rudy was born on August 10, 1931 in Winkler, MB. Rudy grew up in Winkler, where he worked in Janzen's General Store, the Red & White Store, and Janzen's Variety Store. Rudy worked at Friesen and Wiebe Building Supplies and then Winkler Building Supplies. After WBS was sold, he went to work at Parkside Lumber and remained there almost until his retirement. He finished his working career with a short stint at Penner's Home Hardware, working once again in the painting department. He was described by his employers as a very faithful employee. As a kind, gentle soul, Rudy's interest could be characterized by a tremendous love for nature - as shown by his love for gardening; and more specifically the attention and care he poured into growing his varied tomato plants; his love of birds - constantly reading up on different bird species and always ensuring feed was available so he and Katy could watch birds from their kitchen window while sharing their daily routines. His interest in fields that were being grown by farmers - and his genuine care for the success of local farmers and their varied crops. He also showed this interest and that of his community's which was expressed by his wonderfully animated story-telling. Always able to recall specific dates, places and names of those to whom he referred. Lastly, his love of travel with his family was amongst his greatest pride and joy - for which he was able to appreciate all the elements of nature that he enjoyed and got to do so with the ones he loved dearest to his heart. Road trips near and far, Rudy always took great joy in chauffeuring his family in the comforts of the vehicle for which he took such pride and care. Viewing will be Wednesday (today) from 2:00 p.m. until 6:00 p.m. at Wiebe Funeral Home, 121 8th St. in Winkler. Memorial service will be held at 11:00 a.m. on Thursday, January 7, 2016 at the Wiebe Funeral Home preceded by a private interment at Westridge Memorial Gardens in Winkler, MB. The family wishes to extend their gratitude to the caring and compassionate staff at Salem Home and everyone who has provided support during this time of loss. Wiebe Funeral Home, Winkler In care of arrangements, 204-325-4201 wiebefuneralhomes.com