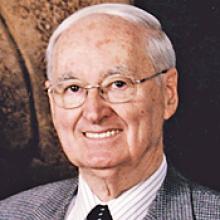 LEONARD SALUSBURY EVANS Peacefully, surrounded by the love of his family, Leonard Salusbury Evans, passed away at St. Boniface Hospital on January 2, 2016 at the age of 86 after suffering a heart attack. Predeceased by his wife, Alice, he leaves behind his three children, Brenda (Ron Bell), Janet (Chris Newton), and Randall (Cathy Evans); four grandsons, Jamie Bell (Amy), Devon Bell-Evans (Ashley), Andrew and Jeffrey Newton-Evans, and five great-grandchildren, Spencer, Corbin, Reegan, Keira, and Griffin. Len was born on August 19, 1929 in Transcona, Manitoba to Blodwyn (nee Salusbury) and David Evans. He was extremely proud of his Welsh heritage. Coming from a working class background, he was the only one in his family to attend university, earning an MA in Economics from United College (later U. of M.). In 2001, he was awarded an honorary doctorate from Brandon University, of which he was very proud. He married the love of his life, Alice Mazinke, in 1954. After a short stint as a high school English teacher, he moved his young family to Ottawa to work for the Dominion Bureau of Statistics (Stats Can) and then the CMHC. After eight years, missing family and friends, he asked to be transferred back to Manitoba. In 1965, he accepted a position at Brandon University as an Economics professor. Having had a father who served as an alderman for the city of Transcona from 1938 to 1953, politics was in his blood. In 1953, at the age of 24, he ran for the federal constituency of St. Boniface, Manitoba as a CCF candidate. 16 years later, in the midst of pursuing his PhD, he was approached to run provincially for the NDP. Elected to the Schreyer government in 1969, he proudly served the people of Brandon East for 30 years. After leaving politics he served on the Public Utilities Board and more recently the Board of Governors of Brandon University. There has been much media coverage in the past few days about Len's legacy as an MLA and cabinet minister. His accomplishments are too numerous to list in detail here. He often spoke about expanding the boundaries of the City of Brandon, the construction of the Keystone Centre, and the rebuilding of the First Street bridge as a few of his proudest achievements. He worked tirelessly for his constituents and their individual concerns. Len was tenacious and never left a job half-done. His socialist principles guided his actions throughout his life. A fierce champion of social justice, he touched the lives of so many people and left the world a better place. In 2010, as a tribute to his outstanding contribution to the community, the new addition to Assiniboine Community College's north hill campus was named The Len Evans Centre for Trades and Technology. An accordion player and pianist, Len loved performing and played many a concert in local seniors' homes. He enjoyed hosting parties, good food and conversation which inevitably involved the current political issue of the day. He was a staunch humanist and a long time member of the Unitarian Church. Len was a generous, supportive, loving father and a wonderful provider for his wife and family. The death of Alice last June after 62 years of marriage left him devastated. He mourned her deeply. In recent weeks however, he was starting to enjoy life again. He continued his political activism through his many letters to the editor of the Brandon Sun. The outpouring of kind words and accolades written about Len has been overwhelming. The family is humbled and grateful for the love and support from the people of Brandon, the province of Manitoba and beyond. Dad would have felt deeply honoured. Words cannot express our thanks to the staff of the ICCU at St. Boniface hospital for the outstanding compassionate care our dad received and the kind support extended to our family at such a difficult time. A small gathering was held for family and close friends. A public memorial service will be announced in the spring. In lieu of flowers, donations may be made to the Len Evans Memorial Scholarship at Brandon University by cheque (payable to the Brandon University Foundation) 270-18th Street, Brandon, MB, R7A 6A9 or online at www.brandonu.ca/give/donate Messages of condolence may be placed at www.brockiedonovan.com. Arrangements were in care of Brockie Donovan Funeral & Cremation Services, Brandon, (204) 727-0694.