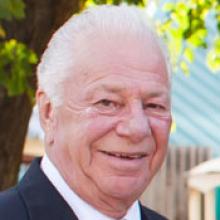 ROSS IVAN LEATHERDALE 1937 - 2016 On Monday, January 11, 2016, Ross Ivan Leatherdale, aged 78 years, of Winkler, MB, passed away early in the morning and unexpectedly while on holidays in Jamaica. He was predeceased by his first wife, Patricia (nee Rusk) in July of 1988 and his brother, Orville. He leaves to mourn his passing, his wife of 24 years, Shirley (nee Falk); the children from his first marriage; his daughter, Jeannette (Derryk) Rainkie, grandchildren, Dustin (Marie Claude) of Winnipeg and Melissa of Morden, his son, Clark of Winkler, grandson, Tyler of Buffalo, MN, his daughter, Tammy Kelly of Brandon, grandsons, Cody and Clinton, as well as Shirley's family; her daughter, Wendy (Ernie) Enns of Winkler, granddaughter, Sharlene (Mike) Frechette of Winnipeg, great-grandson, Connor, granddaughter, Nicole (Kevin) Penner of Winkler, great-grandchildren, Ella, Carter, Tucker, her son, Brian (Darlene) Friesen of Friedensruh, grandchildren, Lexie and Brett, her son, Glenn (Orla) Friesen of Winnipeg, and granddaughter, Mila. Cremation has taken place. A memorial service will be held at 2:00 p.m. on Monday, January 18, 2016 at the Winkler Mennonite Church, 31 Willowdale Cr. In lieu of flowers, donations may be made in Ross' memory to either Siloam Mission, 300 Princess St., Winnipeg, MB R3B 1M3 or to the Heart and Stroke Foundation, 6 Donald St., Suite 200, Winnipeg, MB R3L 0K6. Wiebe Funeral Home, Winkler In care of arrangements, 204-325-4201 wiebefuneralhomes.com