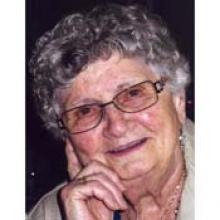 HELEN GOOSSEN (nee BRAUN) 1924 - 2016 Helen Goossen, 92, of Manitou, MB passed away Thursday, January 21, 2016 at Pembina-Manitou Health Centre. Helen was born January 16, 1924 to Peter and Katherina Braun of Altona. Helen came from a family of 14 children, two of which died in infancy. She was predeceased by her remaining seven sisters and four brothers. Helen grew up on a farm five miles east of Altona (Eigengrund). She learned to work hard from early childhood on milking cows, gathering eggs, gardening. At harvest she and sister, Mary and brother, Jack would help their dad grease up the threshing machine. Helen loved sports; playing soccer and baseball were her specialties. Even after school she played baseball with neighbouring teams. Her place was pitcher, catcher or first base. Helen's dad led her to the Lord when she was 12 years old on Easter Sunday after explaining the reason that Jesus was crucified and that He rose again so that through Him we could have eternal life. Helen met Jacob (Jake) Goossen on September 23, 1939 when her older sister; Teenie married Jake's oldest brother, Henry Goossen. It would be another six years before they would marry on July 7, 1945. The Lord blessed them with seven children. Helen and Jake farmed all their married lives until 1997 in the Manitou area. In January 1991 they moved off the farm into their newly built home in Manitou. Helen and Jake were active in their church and community, even serving as youth sponsors when they were in their 50s. Their home was always a place of hospitality and laughter. Helen's zest for life and fun-loving nature endeared her to many. Helen loved to play piano and sing. She often sang in duets and trios. Jake would often accompany Mom on his mandolin. They instilled in their children a love and appreciation for music. Following Jake's death in 1998 Helen continued to live in Manitou until 2005 when she moved to Oak West Estates in Morden where she lived for 10 years. She was actively involved in church and community. She loved to visit and encourage people. Helen found great solace and strength in her faith in Jesus Christ. She loved the Scriptures and her Bible is well-worn and marked. She was a great prayer warrior. She loved and prayed daily for her children, grandchildren and great-grandchildren. She was also very generous in donating to many Christian organizations. Camp work was dear to her heart - she and Jake helped out many summers at Winkler Bible Camp and Simonhouse Bible Camp. During the last several years, Helen was diagnosed with early onset dementia and in September 2015 she moved to her last earthly sojourn at Pembina-Manitou Health Centre. Although her dementia more and more scattered her thoughts making communication more difficult, she retained a clarity in her prayer life and her love for her family and others remained strong. Helen's sociable and light-hearted nature continued to show through even as her illness progressed. Helen was predeceased by husband, Jake in 1998, and by one grandson in 2001. Helen is survived by her seven children: Carolyn, Ted (Mary), Milli (Don) Stewart, Debra (Don) Riley, Gareth (Gayle), Eldon (Gwen) and Iris (Gerald) Buller. She is also survived by 16 grandchildren (spouses) and 16 great grandchildren. "Precious in the eyes of the Lord is the death of His saints." Psalm 116:15 Funeral service will be held at 11:00 a.m. on Tuesday (today) at Westside Community Church, 831 Thornhill St. in Morden with interment to follow at the Manitou Cemetery. If friends so desire, donations may be made in Helen's memory to either the Pembina-Manitou Health Centre or Mennonite Brethren Missions. Wiebe Funeral Chapel, Morden In care of arrangements, 204-822-4755 wiebefuneralhomes.com