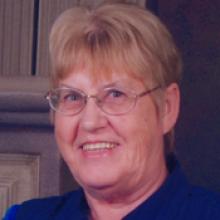 EDITH MARGARET HAY Edith Margaret Hay passed away on January 23, 2016 after a courageous battle. Edith was born in Winnipeg on February 28, 1938 the second child of Nellie and Herman Kowlesky. She attended school at Oak Bluff before her family relocated to Austin. Edith received her teaching certificate at Normal School in Winnipeg and taught for a short time at schools near Plumas and Bagot. In 1959, Edith married her sweetheart Don Hay. They lived on the family farm near Austin until moving to Minnedosa in 1967. They relocated to Brandon in 1979 then returned to Minnedosa in 1986. Edith operated the concession at the Minnedosa Golf Club for two summers in the late 1970s, worked at The Bay in Brandon and at the Minnedosa United Church office. Edith was a dedicated wife and mother. She worked tirelessly, offering unconditional love and support to her family. Family and friends were very important to Edith. She loved having people over to her home where much laughter could be heard. The Hay home was a gathering place and she always had room for one more at the table or to spend the night. Edith was very active in her community. She was a longtime member of The Order of the Eastern Star where she served as secretary. She also enjoyed the companionship she found in the Red Hat Society. She liked going down to the Minnedosa 50+ Activity Centre where she met friends to plays cards and visit. Edith was predeceased by husband Don in 2008. She is lovingly remembered by her children Donna Dowsett (Jim), Joan Hay (Neil), and Darren Hay (Sandy); grandchildren Lee-Anne Adams (Peter), Casey Smithson (Kyle), Amy Leonard (Lee), Melanie, Courtney and Rachael Hay; and great-grandchildren Hazel, Wilder and Zachary. The family would like to extend a special thank you to Dr. Onyshko and all the staff at Minnedosa District Hospital for their excellent care and compassion. A celebration of her life will be held January 28, 2016, Minnedosa United Church, 2:30 p.m. Rev. Natasha Pearen presiding. Memorial donations may be made to the Minnedosa Health District Auxiliary, Box 1916, Minnedosa, MB R0J 1E0, or Central Plains CancerCare Services, 318 Saskatchewan Ave. E., Portage La Prairie, MB R1N 0K8. "There is a link that death cannot sever, love and remembrance last forever" Minnedosa Funeral Service in care of arrangements. 1-204-867-3868