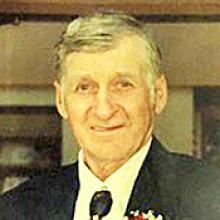 JOHN WINNICKY It is with deep regret that we announce the death of John Winnicky, 82, formerly of Piney, at the Personal Care Home of Vita, on January 26, 2016. He is survived by his children: Donald (Bev), David (Debbie), Cheryl, Tim (Karen), and Tracy (Agatha), grandchildren: Keith (Julie), Colt, Marc, Victoria, Chase, Shane, and Taylor, great-granddaughter Aubree, and one sister, Catherine. He was predeceased by his wife Shirley (nee Cicholski), his parents, Joseph and Mary, two brothers and two sisters. John grew up in Caliento, moved to Piney in 1948 and farmed for most of his life. Funeral service will be held on Saturday, January 30, 2016 - 10:30 a.m. at Vita Funeral Home, 256 Railway Avenue, Vita, MB with viewing prior to the service. Interment will follow the service in the Ukrainian Greek Orthodox Cemetery, Sundown, MB. A special thanks to the staff at the Vita Personal Care Home for their years of care of Dad.