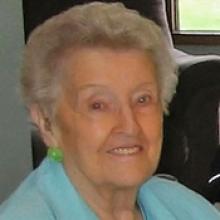 RHEA MAY MCCARTHY (DELAVAU) (nee RAWSON) After a brief illness, our loving mother and grandmother Rhea May McCarthy passed away peacefully on January 29, 2016 at the age of 94 years. She was predeceased by first husband Raymond Delavau in 1976, second husband Charlie McCarthy in 2007, sisters Viola, Merle and Thelma and brothers Les and Laurence. Left to cherish her memory are her sons Laurence (Darlene), Allan (Jennifer), Randy (Elaine) and Jeff (Sandra). Grandma will be greatly missed by grandchildren Carly, Laura, Chris, Derek, Riley, Nick and Emily. She will be fondly remembered by her brother Donnie, numerous nieces, nephews, relatives and friends. Mom was born on November 17, 1921 in Grandview, MB to Thomas and Ethel Rawson. Her family moved several times during her childhood and eventually settled in Ochre River, MB. Growing up on the family farm, Mom's responsibilities instilled in her a strong work ethic that continued throughout her life. Mom moved to Winnipeg in 1939 in order to chaperone her younger brother Donnie while he attended the CNIB. While living and working in Winnipeg, Mom met the love of her life, Raymond Delavau. They were married on June 29, 1946 and shortly thereafter started their family. They had celebrated 29 years of marriage prior to his passing. Raising four boys is not an easy task, especially when the last one arrives after the others are already in their teens, but our parents did so with an abundance of love, a sense of humour and enormous pride. Ours was a busy household, but we could always count on our parents' attendance at our sports events. They loved camping and family road trips to Lake Bronson and Thief River Falls. We have many fond memories of those trips with Dad at the wheel and Mom maintaining order with her mirrored visor pulled down and flyswatter in hand. In 1962 our family moved to Brandon to further Dad's career with Manitoba Hydro. The move did not go as planned and we spent July and August living in a tent until our house was ready. Mom always had the patience of a saint and it was certainly tested then. It seems that all that camping experience came in handy. We remained in Brandon for five years until Dad accepted a transfer back to Winnipeg and we moved to St. Vital. Mom was a woman of many talents. She had a green thumb and could grow anything. She knitted beautifully and many loved ones were the recipients of her creations. Her donated baked goods were always among the first to go at any bake sale. She was a great cook and loved to cook for her family. Despite numerous attempts, we still haven't been able to replicate her amazing gravy. Mom was a proud member of the St. Vital Legion and then Winnipeg South Osborne Legion. She enjoyed playing bingo, shuffleboard and cribbage as well as attending the occasional dance. Mom met her second husband Charlie McCarthy at the Legion. They discovered that they enjoyed each other's company and shared similar interests and were married in 1993. Prior to his passing, Mom and Charlie were able to enjoy many summers at her retreat at Winnipeg Beach and trips to Cuba and Holland. The most important thing in Mom's life was her family and her greatest pleasure was spending time with them. Every visit was met with one of her beautiful smiles and the feeling that you just made her the happiest mom in the world. She especially loved to have her family visit at her summer retreat and we spent many a windy day at the beach with her. Mom was a wonderful grandmother and was happy to help out when grandchildren were born. She treasured her time with them and was quick to volunteer when a babysitter was needed. She had the uncanny ability to quiet even the most fretful baby and we joked that Grandma was putting on the "Sleeper Hold". Grandma was always interested in her grandchildren's activities and loved to attend their sports events, music concerts and graduations. Mom was an amazing woman who thoroughly enjoyed life. She was a great role model and an inspiration to anyone who knew her. She had a wonderful sense of humour but could never finish telling a joke because she started laughing before she reached the punch line. She took pride in her appearance and had a wardrobe that was the envy of any woman. The daughters-in-law all agree that Mama Rhea was the best mother-in-law because she was always supportive, never interfering and always put her family first. Thank you Mom for your constant love and the wonderful memories you have given us. We will miss you. In keeping with Mom's wishes, cremation has taken place. A private family gathering will be held at a later date. The family would like to thank the doctors and staff of 4-South at Victoria General Hospital for their compassionate care during Mom's brief stay. We are also grateful to Pastor Dave, his wife Darlene and Mom's friends at Meadowood Manor for making her life there so enjoyable. Special thanks to her team of home care workers and Anita for providing assistance to Mom at her apartment. In lieu of flowers, donations may be made to the Meadowood Manor Foundation, Winnipeg South Osborne Legion Poppy Fund or a charity of your choice. E.J. COUTU & CO. FUNERAL DIRECTORS 204-253-5086 ejcoutu.com