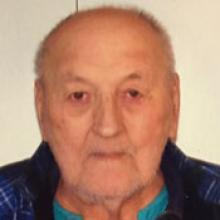 STEVE STADNYK Steve Stadnyk of St. Pierre, MB formerly of Carlowrie, MB was born at Dufrost, MB on April 9, 1929. Steve passed away peacefully at the St. Pierre Hospital, St. Pierre, MB on February 4, 2016 at the age of 86 years. As the Ukrainian Orthodox Parish in Senkiw is not accessible or functional at this time of year, the funeral will be held at Vita Funeral Home, 256 Railway Ave., Vita, Friday, February 12, 2016, at 10:30 a.m. with burial at Senkiw Ukrainian Orthodox Cemetery, Senkiw, MB. Arrangements by Vita Funeral Home 256 Railway Avenue, Vita, Manitoba (204) 425 3114