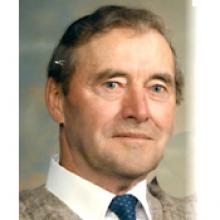 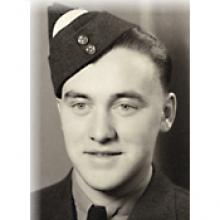 MILTON ELSWOOD MCLEAN March 8, 1926 - February 6, 2016 Milton "Mick" McLean was born in Londesboro district in the RM of Louise, MB, the third child of Ed and Ida McLean. He grew up on the family farm with his brother and sister and attended Londesboro and later Pilot Mound schools. Mick enlisted with the Armed Forces on January 13, 1944. He joined the R.C.A.F. air crew and qualified as an Air Gunner Special Group with the rank of sergeant. He trained in Regina, SK and in Prince Edward Island and served overseas based in England. In 1946 he returned home to Pilot Mound and for the next two years did carpentry work with his father. Mick married Audrey McTaggart in 1948 and that same year he obtained a VLA loan to purchase his grandfather's (John Morrow) homestead in the Silversprings district and began farming. Mick earned his private pilot's licence in 1957 and piloted his own planes until 1994. He was also a licenced ham radio operator. Mick's second marriage in 1975 was to Kathleen Neilson. They lived and worked on the farm until 1989 when they retired to Pilot Mound. Their retirement years were filled with travel within North America, Europe and the British Isles. They took numerous camping and fishing trips with the motor home or camper truck, making many new friends along the way. Mick spent many enjoyable hours flying his plane and sharing the experience with family and friends. He taught and shared his hunting skills with his nephew Brian and they enjoyed hunting together. Mick and Kay were both members of the Pilot Mound Legion (Mick joining in 1946). This was a fellowship which meant a great deal to them both. Mick held the office of branch president and zone commander at various times. When Kay became ill, Mick moved to Prairie View Lodge, Pilot Mound where he resided from March 12, 2015 to February 6, 2016. Milton was predeceased by his beloved wife Kay on April 17, 2015, also by his brother Alex McLean and sister-in-law Olive, and his sister Myrtle and brother-in-law Albert Hughson. He will be remembered by Kay's daughter Sandy (Paul) Charette, Kay's grandsons Scott Pritchard (Yolande) and Ryan Pritchard (Valerie), Mick's nephew and nieces - Brian Hughson (Lorna), Ida Cudmore, Gail Brown (Ray), Margaret Barton (Art), and Kay's nieces and nephews - Lorraine Olson, Maureen Bridges, Keith Kilfoile, Bonnie Scott, Wesley Wagner, Wendy Holensky, and Wanda Mills, and also by his great-nieces and nephews. In lieu of flowers, donations may be made to Pilot Mound Legion Branch #62 or to a charity of your choice. Funeral services will be held on Saturday, February 13, 2016 at the Pilot Mound United Church at 2:00 p.m. with Emily Lovell officiating. Interment will be held at the Greenwood Cemetery in Pilot Mound. Messages of condolence may be made online at www.wheatlandfs.com Wheatland Funeral Service www.wheatlandfs.com- (204) 825-2848