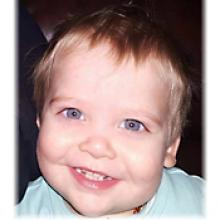 DANE ALEXANDER KALETA Sadly and suddenly on February, 9, 2016, Dane Alexander Kaleta, aged two years, of Dauphin, MB, passed away at home in his sleep. Dane was born on January 27, 2014 at Health Sciences Centre in Winnipeg, MB, to Curtis and Kendra Kaleta and big sister Macy Elizabeth Kaleta. Having been born two months early and with a rare congenital disorder, he struggled from the very beginning. Right after birth, he was whisked away to the Neonatal Intensive Care Unit (NICU) for specialized care, where he endured multiple x-rays, CT scans, ultrasounds, blood tests and IV's. He underwent major surgery at one day old and spent almost two weeks on a ventilator because he was not strong enough to breath on his own. When Dane was six days old, he stopped breathing and his heart nearly stopped, as well due to a bleed in his right lung. Thankfully the NICU staff were able to revive him with CPR and special heart drugs. Dane spent a month in the hospital in Winnipeg before we were finally able to bring him home. The next several months were filled with many doctors appointments in Dauphin, Winnipeg and Saskatoon. Dane had three more surgeries before his first birthday but came through them all like a little champ. Dane loved listening to and dancing to music, looking at and listening to books read to him and playing with his big sister Macy and cousin Ashton. He really liked bath time and going to swimming lessons at the pool. He enjoyed his visits and sleepovers at Grandma and Grandpa's, Nana and Pa's and Uncle Jason and Auntie Candace's. He loved his stuffed animals (mostly so he could rub the tag between his fingers and suck on his two middle fingers at the same time - this seemed to soothe him). He also loved anything that had wheels or that he could push around, like little toy cars, trucks, tractors and especially trains! He also enjoyed taking things apart and putting them back together like LEGO and Duplo. One of Dane's favourite things to do was go to the hospital with Dad and Macy when Mom worked evenings as a nurse, to have supper together in the cafeteria. His favourite game was peek-a-boo and he loved to be tickled. Dane even became a seasoned traveller in his short life, having been to Kelowna, BC on a big plane to see friends Rick and Allie and to Winnipeg on the VIA Rail train to see Uncle Warren and as well as the old Prairie Dog Special train from Winnipeg to Grosse Isle and back. Dane leaves to mourn his passing and cherish many fond memories; his parents, Curtis and Kendra Kaleta; four year old sister Macy; grandparents, Ken and Yvonne Lillie, Dauphin, MB and Sandra and Glenn Kaleta, Dauphin, MB, Great-Grandparents, Glenn and Pat Rogge, Medicine Hat, AB, Uncle Warren Lillie, Winnipeg, Uncle Jason Kaleta, Auntie Candace McMillen and cousin Ashton Kaleta, Dauphin and many extended family, including great-aunts and uncles, and second cousins. Dane is predeceased by his Aunt Erin Elizabeth Lillie (July 26, 1979); great-grandparents, James and Gladys Lillie, great-grandparents, Gordon and Iris Lawson, and great-grandparents, John and Dorothy (Jean) Kaleta. A celebration of Dane's life was held on Tuesday, February 16, 2016 at 2:00 p.m. in the First United Church in Dauphin, Manitoba. Rev. Larry McPhail and Mr. Wayne Olson officiated. Eulogies were read by Jason Kaleta, Warren Lillie and Yvonne Lillie. A special musical selection "You are my Sunshine" was sung by John Graham, Don Husband and Dick Kirkpatrick. Interment followed in the Riverside Cemetery, Dauphin. Active pallbearers were Jason Kaleta, Warren Lillie, Shawn Dando and Dominic Gamache. Honorary pallbearers were Ashton Kaleta and Glenn Rogge. In lieu of flowers or those wishing to make a contribution to the Kaleta family, can do so by going to https://www.gofundme.com/5mf9hyqc. Memorial donations can also be made to Ronald McDonald House Manitoba or to the Children's Hospital Foundation of Manitoba. We would like to thank all family and friends for their support and kindness at this time and throughout Dane's life. Special thanks to all of the Medical and Rehabilitation staff that helped Dane during the past two years and especially those who worked so very hard to help save Dane on the last day of his life. YOU ARE MY SUNSHINE Sneath-Strilchuk -Dauphin Chapel 204-638-4110 www.sneathstrilchuk.com