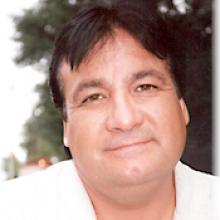 SAMUEL VOISEY Samuel Frank Voisey of Dauphin, MB passed away on Tuesday, February 16, 2016 in God's Lake Narrows at the age of 59 years. Samuel was born on July 25, 1956 in Fort Churchill, MB to parents John and Frances (Harris) Voisey. He grew up in Fort Churchill with his seven siblings, Pat, Grace, Anne, Emily, David, Sonny, and Connie. He attended school in both Fort Churchill and Churchill, MB. Growing up in Fort Churchill and Churchill, Sam was also an altar boy at the Roman Catholic church for a few years. Sam attended numerous colleges, earning his Water and Waste Certificate as well as his Red Seal in Carpentry. Most recently, Sam received his Master's Degree in Project Management at the University of Winnipeg. Sammy's first job was bagging potatoes at the Hudson Bay Store which is how he got the nickname "Spuds". After completing school he worked at Churchill's Pre-Fab plant then went on to Flin-Flon, where he worked for H.B.M.S. After this, Sam went and worked in Rankin Inlet, NWT, before going back to Churchill where he worked for Churchill Housing where he met his future wife Donna Coma. They stayed together in Churchill for two years before moving to Thompson, MB, where he worked for Northern Affairs a number of years on various Northern Projects flying to many northern communities. Thompson became the birthplace of their only daughter, Ariel Elsie Frances Voisey. Donna, Sam and Ariel lived in Thompson until Ariel was two years old and from there moved to their current home in Dauphin, MB. Sam then started work for Manitoba Housing, then moved on to a consulting with First Nation communities for a number of years throughout Northern Ontario, Saskatchewan and Manitoba. Sam's career ended in teaching, this was something that he loved doing. In Dauphin he was active with the Lions Club for a number of years and his other passion was politics. Sam's other passions where hunting, fishing, playing and coaching hockey and baseball. Traveling with his family throughout the States, Mexico and to the Dominican. Sam's favorite hockey team was the Montreal Canadiens. Sammy enjoyed was always laughing and telling stories to his friends and family about his many adventures, playing cards and lotto 649, his many pets, cooking a big Sunday morning breakfast and "Wunniman" burgers. Sam absolutely adored his grandson and enjoyed talking to Wyatt on Hangouts. Sam leaves to mourn his passing his beloved wife Donna Voisey (Coma); their only daughter Ariel Voisey (Anthony Djekic); grandson, Wyatt Edward Voisey-Djekic and a second grandchild due to be born this summer. Sam is survived by his mother Frances Voisey; sisters Pat (Riel) Ouellette of Winnipeg, MB, Grace Clark of Winnipeg, MB, and Connie (Curtis) Dancyt of Lac du Bonnet, MB; mother-in-law Elsie Coma; brothers-in-law Dean Coma (Jen Jarocki), Brian (Debbie) Coma and sister-in-law Brenda Lewis as well as many nieces, nephews and extended family. Sam was predeceased by his father John Voisey, sister Anne, brother David, sister Emily and brother Cecil (aka Sonny) and father-in-law Edward Coma. A Celebration of Life will be held at 2:00 p.m. on Sunday, February 21, 2016 from Sneath-Strilchuk Dauphin Chapel in Dauphin, MB. Eulogy will be delivered by Dean Coma, Honorary Pallbearers are Dean Coma, Brian Coma, Peter Clark, Waylon Clarkson, Cole Coma, Wilfred McPherson, Michael Spence, Charlie Schweder, John Augustowich and Debbi Onischuk. Charitable donations in memory of Sam may be made to the Parkland Humane Society in Dauphin, MB. "He was the light that filled a room, with his laugh and presence. He enjoyed greeting you with a great big smile and a Polar Bear Hug!" Sneath-Strilchuk - Dauphin Chapel 204-638-4110 www.sneathstrilchuk.com