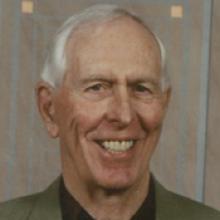 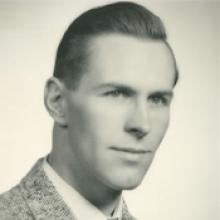 CHARLES DONALD HASSELFIELD May 5, 1924 - February 23, 2016 Don was born in Deloraine, MB on May 5, 1924 the only son of Charles Frederic and Lillian Irene (Edmondson). Don attended school in Deloraine until graduation. After a year at the Royal Canadian Naval College in Victoria, BC he served two years at sea with the RCNVR. The first year was spent on HMCS Iroquois in the North Atlantic, Arctic (Murmansk Run) and the Bay of Biscay. The second year was on HMCS Snowberry, mostly in the English Channel. During the period of 1942 to 1945, Don rose from Naval Cadet to Lieutenant. After the war he attended the University of Manitoba, graduating with a BSc. in Pharmacy in 1949. On August 17, 1947 Don married Verna Janet (MacLachlan). They had five children: Charles John, Virginia Dagmar, Donald Barton, David Lachlan and Elizabeth Dorothy (Lisa). Presently they have 11 grandchildren and four great-grandchildren who mourn Don's loss. Don was predeceased by Verna in 2006 and his grandson Corey in 2002. Don is survived by his sisters - Lorna Hamilton and Gwen Trip. In 1955, Don took over ownership of his father's business, Hasselfield's Drugs, which had been established in Deloraine in 1903. A familiar figure at the back of the store in his white coat, Don served the community until, at the age of 72, he passed the baton to the third pharmacist in the family, his eldest son John. During Don's career he received the prestigious award of the Bowl of Hygeia which is given by state, provincial, and national pharmacist associations in the United States and Canada to recognize a living pharmacist that possesses outstanding leadership in their community, while encouraging other pharmacists to take active roles in their communities. Don served as Town Councillor and contributed to many community projects over the years such as the installation of artificial ice in the arena, and watered fairways at the golf course. He took over from his father in 1955 as treasurer of the Red Cross and became interested in the Water Safety Program. He was a convenor of the program for 20 years. A lifetime love of hockey led to quite a number of years of involvement with the Deloraine Minor Hockey Program. He and Glynn North, with Roy Perrin of Killarney and Len Keyes of Boissevain, organized the Turtle Mountain Minor Hockey League, which is still going strong. In 1965-1966 he and Lorne Day combined their teams to win the M.A.H.A. Bantam AB Championship. Don and Verna enjoyed many years of Square Dancing and helped to form the Turtle Mountain Twisters. The Deloraine Chamber of Commerce honoured Don and Verna as "Citizens of the Year" in 2000. This recognized their contributions to the community and in particular, their work on the two History books of Deloraine - "Deloraine Scans a Century" from 1880 to 1980 and "Deloraine Meets the Millennium" a 643 page history from 1980 to 2000. Don and his family experienced decades of enjoyment at Lake Metigoshe. Don, along with Glynn North, George Franklin and Rod Fraser, created Lake Metigoshe Investments Limited following the purchase of the land from an American owner in 1955. By 1999 all of the lots had been surveyed and sold land except for a portion that was donated as protected forest. To this day, Don's children, grandchildren and great-grandchildren enjoy the lakefront family cabin. After retiring from the drugstore, Don enjoyed many years of great golf. Very active in the Deloraine Golf Club community, he organized many weekly tournaments, playing well until the age of 85. Slowed down by a diagnosis of Spinal Stenosis, he moved to the Deloraine Personal Care Home in 2011. The family would like to thank the doctors, nurses and health care staff of the Deloraine Personal Care Home for giving such high quality, loving care to our dad during his final years. Donations in memory of Don may be made to the Southwest Foundation or to a charity of one's own choice. Wheatland Funeral Home entrusted with arrangements.
Publish Date: Mar 12, 2016

CHARLES DONALD HASSELFIELD Charles Donald Hasselfield beloved husband of the late Verna died peacefully surrounded by his family on February 23, 2016 at Delwynda Court Personal Care Home in Deloraine, Manitoba at the age of 91. A funeral service will be held on Friday, February 26, 2016 at the Deloraine United Church at 2:00 p.m. Interment will be held at the Del-Win Cemetery in Deloraine, Manitoba. Donations in memory of Don may be made to the Southwest Foundation; Box 338 Deloraine, MB R0M 0M0, or to a charity of own choice. Messages of condolence may be made online at www.wheatlandfs.com. Smith Funeral Home - (204) 747-2088
Publish Date: Feb 25, 2016