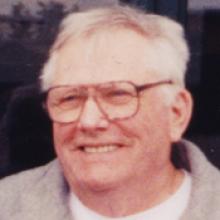 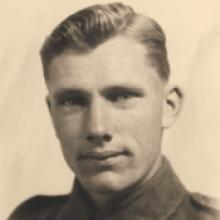 WALTER (WALLY) DUNN November 26, 1922 - February 11, 2016 Wally was born on a farm at Langruth. The family later moved to Winnipeg, residing on Woodlands Crescent opposite the St. Charles Country Club where Wally worked as a caddy and became a good golfer. In later years Wally golfed at the Rossmore Country Club. Wally and his siblings attended Kirkfield Park School where the St. James Superstore now stands. After schooling, Wally worked at a British Columbia ski resort and became a good skier. Wally skied long before the days of T-bars and ski lifts, having to climb up the mountain with skis on before skiing occurred. Wally later worked at the Brandon race track where he bought a trotter named Penny. Wally rode Penny home to Winnipeg - following the river and buying oats and food for himself from farmers along the way. It took Wally two to three days sleeping under the stars to ride Penny home. Sadly Penny broke her leg while Wally was overseas and had to be put down. In 1939 Wally spent six months of training before going overseas with the Queens Own Cameron Highlanders. Wally fought in most of Europe. While in England Wally for a short period of time drove an army truck at night, headlights turned off, up to Scotland. This truck was loaded with ammunition. A beautiful young lady named Maggie accompanied Wally and drove the truck at night, headlights turned off, back to England. This young lady named Maggie was actually Princess Elizabeth, now known as Queen Elizabeth. As manpower was tight Wally helped briefly at the now 200 year old Knapp Hill Nursery. One Christmas day while in Germany a German soldier appeared from the bush and yelled out No fighting today', and with his accordion began to play Christmas carols. Both armies began to sing - not a single shot was fired this day. The next day the German soldiers had retreated. German women and children were starving, Canadian Army officials arranged for a truckload of food to be delivered daily to those people. When the war ended these people invited the Canadian soldiers to return for a visit. At the end of the war Wally was assigned guard duty on the top floor of the Queen Elizabeth ocean liner. Nursing sisters were housed on the top floor of this ship that was bringing Canadian troops home. If anyone tried to reach the ship's top floor orders were shoot to kill. After the war Wally returned to Winnipeg and a normal way of life. Wally returned to playing golf, archery and 10 pin bowling, excelling in all these venues. One year Wally was Manitoba Archery Champion. Wally worked briefly for a roofing contractor and then Bristol Aviation. The rest of Wally's working life was spent at Pritchard Engineering doing various jobs which included the building of diesel generators that he installed up north. Wally owned a lakefront cottage at Caddy Lake where he taught kids how to water ski. He also helped the Caddy Lake store owners when needed. At one of Wally's 10 pin bowling leagues, he was asked to help a new bowler named Heather. Before long we married and enjoyed a wonderful life together. Our cottage in Northwest Ontario and home have both been renovated using Wally's knowledge, skills and expertise. Wally was predeceased by three brothers, three sisters, and his first wife. Wally is survived by one brother. Cremation has taken place. As per Wally's wishes, no formal service will be held. In closing, thanks to all the wonderful staff on T5 at Deer Lodge Centre (the Veterans Ward), Veteran's Affairs Canada, home care, CancerCare, Dr. W. C. Schellenberg and Dr. J. Milner for all the help given to Wally over the years.