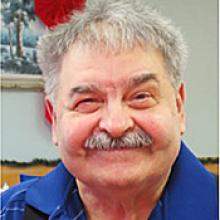 EMIL SANDUL Peacefully, on February 27, 2016 at the Vita & District Personal Care Home, at the age of 74. Emil was born in Stuartburn, MB on December 6, 1941. He was predeceased by his father George Sandul, in 1961 and his brother Stan, in 1995. Left to cherish his memory are his mother Doris Sandul, at the Vita & District Personal Care Home; sister Olga Fedorowich; brothers, Nestor (Sophie), Walter, Lawrence (Connie), Erv (Deb), along with many nephews and nieces, all from Winnipeg. The family would like to thank everyone at the Vita & District Personal Care Home for their kindness and friendships made with Emil. He always spoke highly of all of you and the fun he had telling jokes and kidding around with all the staff. You made the latter years of his life very enjoyable. He will be playing you all a polka or a waltz every Saturday night from his boom box in the sky. The funeral will be held on Wednesday, March 2, 2016 at 10:30 a.m. at the Vita Funeral Home, 256 Railway Avenue in Vita, Manitoba, followed by a luncheon. Interment will follow in Arbakka, MB at the Saints Peter & Paul Orthodox Cemetery. In lieu of flowers, donations may be made to the Cancer Society. Arrangements by Vita Funeral Home 256 Railway Avenue, Vita, Manitoba (204) 425 3114