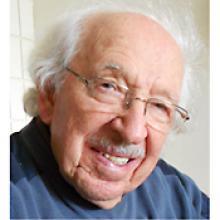 SAM KNACKER August 5, 1921 - March 2, 2016 As a young Jew in Second World War Romania, Sam Knacker was forced on to the front lines as a conscript in an army allied with the Nazis. He thus evaded a trip to Auschwitz but wound up as a Soviet prisoner-of-war, becoming the ironic enemy of the enemy of the people who killed his father and youngest sister. A husband, father, musician, tailor, grocery-store-owner and war survivor, Knacker died March 2 at Winnipeg's Sharon Home from complications related to cancer treatment and old age. He was 94. Sam's life was divided into three very different periods: a relatively idyllic upbringing in Transylvania; a traumatic struggle to survive both the Second World War and a grim post-war existence in eastern Europe; and then more than 50 years of peace and relative prosperity, the vast majority of it in Winnipeg. Sam was born in 1921 in Sighet, Romania, the eldest son of a tinsmith and a homemaker who died in her 30s from tuberculosis. As a teenager, he wanted to sing professionally, but wound up a tailor. In 1942, he was conscripted into the army and then sent, with other Jews, to labour on the front lines. His father and four sisters were shipped to Auschwitz, where only three siblings survived. In 1944, when the Soviets captured his unit, he was considered a Nazi enemy and shipped off to a P.O.W. camp in Crimea, where he was put to work as an orderly, roofer and fishing-boat cook until his release in 1948. Upon returning to Sighet, he married Sara. They had a daughter, Stella. Conditions in post-war Romania, however, led the family to emigrate to Israel in 1958. Decades of persecution as Jew in Europe forged him into a proud Zionist. Life in Israel was not meant to be. Sam took his family to Canada to join family in 1961. He worked as a tailor in Winnipeg before buying an Inkster Boulevard grocery, which he ran until 1979. He then went to work for Eatons as a tailor, salesman and fitter. Sara died of breast cancer in 1984. Sam then met Nurit, who would become his second wife in 1996. They wound up together for three decades. She remembers him as a charmer who loved people and was known for his smile. "Everybody liked him. He liked to share his wisdom," Nurit said. Sam never gave up his dream of becoming a musician. He sang in the Rosh Pina, North End Jewish and Yiddish choirs. He played harmonica at McNally Robinson and seniors' centres as well as in the Seniors Philharmonica Band. Sam is survived by Nurit; his sister Ghita Weltman and nieces and nephews in Canada, the U.S., Israel, Sweden and Holland. Nurit would like to thank his physician and the caring staff at the Simkin Centre, where Sam lived the final years of his life. A service will be held Friday, March 4 at Chesed Shel Emes, 1023 Main St., with burial to follow at Shaarey Zedek Cemetery, 236 Armstrong Ave. In lieu of flowers, donations may be made to the Winnipeg Ostomy Association or Simkin Centre.