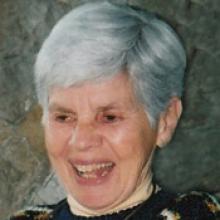 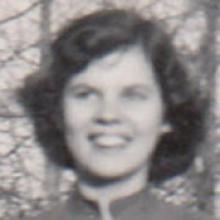 M. PATRICIA DOERKSEN (nee ENNS) 1932 - 2016 Pat Doerksen died peacefully in Winnipeg on Friday, February 26, 2016, with her family by her side. Pat was born on May 4, 1932 in Morden, MB, the youngest of six children of John J. and Anna Enns. Pat was predeceased by her brothers, Ted (Haldora) and Bob (Diana), her sisters, Dorothy (Earl), Gertrude and Laura (Richard), and her son, Clifford (Elspeth). Pat graduated from Winkler Collegiate Institute in 1950 and attended the Mennonite Brethren College in Winnipeg. After completing a program at Normal School, she taught at the schools in Lowe Farm and Horndean, MB. She embarked on an adventure in 1956, heading off to Kodaicanal, India with two friends, Kay Unruh and Mabel Friesen, where Pat taught school for three years. Pat brought home a love for Indian food and her family enjoyed the many fine curries she was skilled at making. On her return to Manitoba she taught school at the Shriners Children's Hospital in Winnipeg. In 1960, Pat married Bill Doerksen, whose R.C.M.P. postings throughout Alberta had them living in Peace River, Edmonton and Calgary. Their three sons, Mark William, Clifford John and Michael Grant were all born in Peace River. The family also lived in Berwick, Nova Scotia before settling in Winnipeg in 1978. After studying library sciences at Red River Community College, Pat worked for Manitoba Library Services for about 12 years until she retired. Pat and Bill also lived in Osoyoos and Vernon, BC, and Cochrane, AB in their retirement years. Pat was an avid reader, a lover of good music, an enthusiastic hiker, canoeist and cross-country skier. She and Bill traveled extensively. She had strong opinions and a ready laugh, which she shared in equal measure. Pat is survived by her husband, Bill, sons, Mark and Mike, daughters-in-law, Tara, Sarah and Elspeth, grandchildren, Kaitlin and Emily Regiec, George and Peter Doerksen, Maxine Bennett and Gladys Carruthers. The family thanks the doctors and staff at the St. Boniface and Victoria General Hospitals for their professionalism, care and consideration in her last hours, as well as all who have reached out in recent days to express their sorrow and support. Clearly Pat had many friends and many whose lives she touched (and whose grammar she corrected). A memorial celebration of Pat's life is being planned for 2:00 p.m. on Saturday, March 26, 2016 at Neil Bardal Inc. Funeral Centre, 3030 Notre Dame Avenue, Winnipeg, MB. Pat's ashes will be interred at Winkler Cemetery at a later date, next to her parents and sister, Gertrude. In lieu of flowers, the family requests donations to the Mennonite Central Committee in Pat's memory. Wiebe Funeral Home, Winkler In care of arrangements, 204-325-4201 wiebefuneralhomes.com