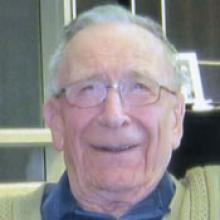 WILLIAM CLARK ENDALL 1921 2016 On Tuesday, March 8, 2016 at Tabor Home in Morden, MB, Bill Endall, aged 94 years went to his eternal rest. Bill was born on a farm south of Minnedosa, the eldest of three children and farming remained in his blood for the rest of his life. His father had to go to the sanitarium in Ninette for treatment of tuberculosis when Bill was eight years old so he grew up very quickly and took very seriously his role as the man of the family. The twin ethics of hard work and responsibility were driving forces in his life but he also learned to have fun. He played baseball, loved curling and later, golf. Bill grew up with music and met Florence Baker at a dance. They were married on December 20, 1947 (he was fond of telling people it was the longest night of the year) and worked together on the farm while raising their children until they moved to Brandon in 1957. Bill worked at the Hydro Generating Station in Brandon for over thirty years and Florence resumed teaching when their youngest child began attending school. The Endall home was known for its hospitality and generosity. Bill and Florence had many good friends and enjoyed countless games of bridge, dominoes and aggravation over the course of their marriage of 57 years. After raising their children, they unhesitatingly took on the task of raising two grandchildren, Teena and Heather. Bill also served on several community boards and organizations over the years and was active in the Anglican Church. Following Florence's death in 2005, Bill moved to Ruth and Brian's home in Morden then subsequently to Homestead South assisted living and a year ago to Tabor Personal Care Home. He retained his ability to make friends and his sense of humour until the end. Bill was predeceased by his parents, William and Della, his sisters, Kathleen and Alma, his wife, Florence and his great-grandson, Ethan. Left to remember him with gratitude and happy memories are: Ruth (Brian Minaker), Jack, (Linda), George (Jeanne) and Alan (Celine Pitre). There are 11 grandchildren: Teena, Heather, Chris, Karen, Katie, Becky, Cathy, Sadie, Della, Clayton and Crystal and 23 great- grandchildren to miss him and recall his strong, positive influence. The family would like to thank the many caregivers who helped him in his later years, especially Dr. Kevin Earl, Mary Benson and her indefatigable bank of Home Care workers, especially, Myrna and Linda and the loving, compassionate staff at Tabor Home. Cremation has taken place and a memorial service will be held in the summer complete with a family picnic, as he wished. In lieu of flowers, donations may be made in Bill's memory to either the CNIB, Tabor Home or to the charity of one's choice. We can all learn from Bill's personal motto: If a job is worth doing, it is worth doing well. Rest in peace, Bill; job well done. Wiebe Funeral Chapel, Morden In care of arrangements wiebefuneralhomes.com