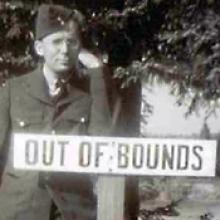 HARRY RICHARD SIMPSON March 2, 1918 - March 8, 2016 Harry Richard Simpson, a legendary gentleman of his time, lived a long and happy life. Harry passed away March 8, 2016, at Prairie View Lodge in Pilot Mound, MB, age 98. Harry was predeceased by his wife of 56 years, Mary Lou, in 2008. He is survived by his son Mike (Pam), grandson Colin, granddaughter Christine and great-granddaughter Ava of Winnipeg; daughter Celia Guilford of Pilot Mound, MB, granddaughter Jessie (Lynden) of Borden, SK; nephew George McMillin (Michele), niece Karen McMillin; and many friends of all ages. Harry was born March 2, 1918 in Winnipeg. His mother, Grace, was born in Chicago; his father, Richard, came to Canada as an eight year old Scottish orphan in 1889. Harry often shared stories of his joyful childhood in Plainfield, IL (1920 to 1930), where his father operated a barbershop and his mother played piano for the silent movies. In 1930 the family returned to Winnipeg. Harry attended Greenway, General Wolfe and Daniel McIntyre schools, followed by Success Business College. His first job, in 1937, was with the City of Winnipeg Relief Department where he worked until 1941. Harry then enrolled in the R.C.A.F., and attended No. 7 Bombing and Gunnery School, in Paulson, MB. In 1943 he was stationed at Torbay, NL, where he remained until the war ended in 1945. American, British, and Canadian forces all served at Torbay: their missions were to provide air cover for Allied convoys, patrol the North Atlantic for U-boats, and protect both St. John's and nearby Bell Island from enemy attack. Following the war, Harry enrolled in night classes at the Winnipeg School of Art. Twice a week from 1946 to 1952 he studied with artists such as Clarence Tillenius, Franz Kuntz and Bill Johnson. In 1952, Harry married Mary Lou Morkin. Their home, designed by Mary Lou, was built at 955 Beaverbrook Street in Winnipeg where they raised their family. Harry had a love for creative endeavours - and when he was not reading, could be found sketching, lettering or typing on his beloved typewriter. Lucky to be his children, Dad shared with us the importance of play, creativity, the value of hard work from an early age, and how to look up the meaning of words we did not know in the huge dictionary on his desk. Harry enjoyed his numerous careers: Bomb Armourer in the Royal Canadian Air Force 160th Squadron in the Second World War, Winnipeg Free Press Reporter, Publicity and Advertising Executive with City Hydro, Account Executive with Cockfield Brown. When Harry "retired" he worked for both McLaren and McKim Advertising companies. Following that, he edited for UGG publications and a local philosopher. He also enjoyed writing the Victoria Hospital newsletter for many years. In their twilight years, both Dad and Mom truly cherished the excellent caregivers at Prairie View Lodge and Rock Lake Personal Care Home in Pilot Mound. Cremation has taken place. A celebration of Harry's life will be held on May 1, 2016 in Clearwater, MB. In lieu of flowers, In Memoriams in Harry's name may be made to Prairie View Lodge Foundation, 26-424 Broadway Ave., Pilot Mound, MB R0G 1P0. Wheatland Funeral Service (204) 825-2848 - www.wheatlandfs.com