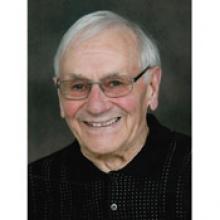 JOHNNY LUIS BINDA 1933 - 2016 On Saturday, March 12, 2016 at Health Sciences Centre, in Winnipeg, MB, Johnny Binda, aged 82 years, of Morden, went to his eternal rest. He leaves to mourn his passing, his wife, Phyllis (nee Waytowich) and one son Doug, and Kirsten Binda, as well as two grandchildren and four great-grandchildren. Cremation has taken place. Mass of Resurrection will be held at 11:00 a.m. on Thursday, March 17, 2016 at St. John the Evangelist Roman Catholic Church, 2 Academy Dr., in Morden, with inurnment at Chapel Cemetery Columbarium. If friends so desire, donations may be made in Johnny's memory to the Boundary Trails Health Centre Palliative Care. Wiebe Funeral Chapel, Morden In care of arrangements, 204-822-4755 wiebefuneralhomes.com