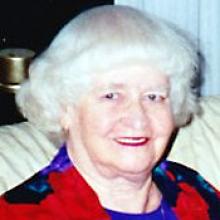 DONALDA (DONA) EILEEN BREKELMANS (nee O'CONNOR) December 29, 1924 - March 10, 2016 Dona, the matriarch of the Brekelmans/ O'Connor clan, (and the last of her generation), left this world to join her loving husband, Tony, her parents Joseph and Mary and all seven siblings in heaven, leaving her children and grandchildren to carry on her incredible legacy. She was born in her childhood home on McMillan Avenue, the fourth of eight children. Dona attended St. Ignatius School as a child and graduated from St. Mary's Academy. She served in the navy during the Second World War, signalling ships safely to shore at Halifax harbour. Dona has continued to serve her country, her community and her family throughout her life. She met her beloved Tony while attending university after the war and they were married on July 1, 1948, ensuring that their anniversary landed on a national holiday each year. Mom always said that the fireworks were as much a celebration of their marriage as it was of our country's birth. While her children were small, Dona worked at various jobs, including English smocking. The dresses and clothing she had smocked were worn by Princess Caroline of Monaco, Justin Trudeau as a baby, and John and Caroline Kennedy. She truly was an artist and took as much care and pride in the clothing she smocked for her own children and grandchildren as she did for the children of the rich and powerful. Once her children were all in school, Dona took a comptometer operator course and worked in that field with T. Eaton Co. and then at N.M. Paterson and Sons until her retirement at the age of 72. Dona brought light and life into all who were blessed to have known her. She managed to ensure that each of her children felt special and had a profound influence in all of their lives. Through her dedication and support, every one of her children has obtained a University education. Her love of the navy was infectious and five of her children followed in her foot-steps, becoming involved in Sea Cadets, Wrenettes, the Royal Canadian Navy as well as the U.S. Navy. Dona volunteered with Navy League Wrenettes and was an active member of CWOA. Dona and Tony settled into the Waverly retirement community in their later years. After Tony's passing, Dona moved into the Canoe Club. In both of those settings, Dona contributed to the wellbeing of others. She created embroidered name plates for each resident who needed a walker and brought good cheer and homemade cookies to anyone who was ill or hospitalized. Her daughter Helen and son-in-law, Phil, have provided loving care to Mom in their home over the past three years. Thanks to Helen and Phil, Mom was able to die with dignity in the presence of loved ones, in her own bedroom. Many thanks to Kristen Legrange, and home care services for their assistance in caring for Mom. Dona gave life to eight children: Ted (Debbie), Bill (Diane), Cathy Hudek, Rosie O'Connor (Carol), Helen Coish (Phil), Pat Barnson (Paul), Joe (Shelby) and Charles (Pamela). Her children, grandchildren and great-grandchildren would like to invite you to participate in a gathering of family and friends for remembrance and eulogy at 7:30 p.m. on Tuesday, March 22, 2016 at St. John Brebeuf Church, 1707 John Brebeuf Place, and to the Funeral Mass at 11:00 a.m. on Wednesday, March 23 at St. Ignatius Church, 255 Stafford at Corydon Avenue. In lieu of flowers, the family would appreciate donations be made to Rossbrook House or St. Ignatius School. LECLAIRE BROTHERS 475 Provencher Blvd., in care of arrangements 204-775-2220