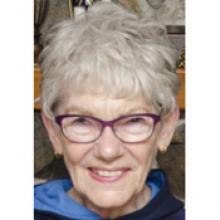 LINDA ANN FULFORD (nee BEAVIS) With great sorrow, we announce the passing of Linda Ann Fulford (nee Beavis), on March 6, 2016, at the age of 71. Linda is survived by her husband, Tim; her three sisters, Margaret Smith (Dave), Marian Ransome (Herb), Connie Ruskin; her mother-in-law Lindy Fulford; her sister-in-law Brenda Bridges (Bob) and many nieces, nephews and cousins. Linda was predeceased by her parents, Allan and Isabel Beavis, in 1995. Apart from a short time spent in Ontario, Linda lived her entire life in Crystal City. She was a bright child and excelled both academically and athletically. In her elementary school years, she became a voracious reader of sleuth novels and amassed the complete collection of Nancy Drew books, as well as the Trixie Beldon series, to name a few. She looked forward to Track and Field days at school, where she won first place in almost all events she entered. In grade 11, she was awarded the gold medal for athletic excellence in Track and Field for the school division. Sports were an important part of Linda's life growing up. She played fastball from the time she was a youngster, until well into adulthood. There was a well worn baseball diamond in the front yard of the Beavis residence and on more than one occasion, a broken window resulted from a wayward hit. Thanks to Dad, the shattered window was always repaired and players were neither reprimanded nor discouraged from play. Linda was instrumental in the organization of the Crystal City Ladies' Fastball Team, (teenagers/adults) and recruited two of her younger sisters when they came of age. Linda provided much leadership for the team as the unofficial captain, coach and manager. In 1974, when mixed fastball became popular, she played first base for the "Crushers" for many years. She was keenly interested in Major League Baseball and was a lifelong New York Yankees fan. Linda was an outstanding curler and devoted much time to this sport in the winter months. She curled in the regular weekly league and also competed in ladies' and mixed bonspiels, even scoring an eight ender once. When curling and baseball were no longer part of her life, Linda remained active. She believed in living a healthy lifestyle and dedicated part of each day to exercise and physical fitness. She loved the outdoors and briskly walked several kilometers a day, either with her sister and best friend, Marian, or with Joey, her Bichon Frise. Linda had a strong work ethic and tasks assigned to her were done to perfection. She retired from her position of postmistress at the Crystal City Post Office in 2010, but continued her bookkeeping business until the end of 2015. Although she had no formal training, she was a computer whiz and used software extensively. Several years ago, Linda and Tim bought a 1968 Cougar, identical to one Linda previously owned as a 24 year old. It was restored to its original condition and they enjoyed driving it to Classic Car Meets, where they socialized with other car enthusiasts. Linda will be remembered for her quiet, friendly disposition, her enjoyment of small town life, devotion to her pets and love of home. To family, Linda was many things. She organized and stored family photos from the 1800s to the present and she was keeper of the family tree. Always marked by a card or an email, family birthdays were never forgotten. Being an amateur photographer, family gatherings were well documented with photos taken and shared by Linda. She cared deeply for all her nieces and nephews, and was always keenly interested in their activities. A special thank you is extended to Sherry Lees (niece) for taking charge of Linda's care during the absence of other family members in early January. Linda was a music buff. Elvis Presley was her all time favourite musician, but she listened to and appreciated many recording artists from her large collection of albums and CD's. The evening she succumbed to brain cancer, "Elvis" music played softly in the background, while Marian held her hand. As per Linda's wishes, cremation has taken place and a private graveside service will be announced at a later date. In lieu of flowers, and in keeping with her love of animals, donations may be made in her memory to any Humane Society. Messages of condolence may be made online at www.wheatlandfs.com