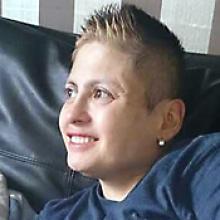 HOLLIE PATRICIA HALL Anumikii Pinashi Ikway March 23, 1977 - March 17, 2016 It is with deep sadness that we announce the passing of our mother, daughter, sister, niece, auntie and friend, Hollie Hall after a brief illness at the age of 38 years. Hollie is survived by her loving daughter Carrie (Colton), Carrie's father Gary, parents Geraldine (Dan) and Norman (Vera), sisters Darion, Dakota, and Delanie, brothers Lee and Ambrose, nieces Daelyn and Aubree, as well as numerous uncles, aunts, nephews, cousins and extended family and friends. Hollie was predeceased by her brothers Lonnie and Kyle, grandparents Caroline and Gordon Bruyere, and grandfather Cyril Courchene. Hollie was born in Pine Falls, MB on March 23, 1977 and lived in Sagkeeng all her life. She enjoyed fishing and was mechanically inclined. Hollie had an energy and carefree, loving nature, and to all who met her, they became her extended family and lifelong friends. Wake service will begin March 19, 2016 at 8:00 p.m. for two nights at the Christ Church Anglican Hall, Sagkeeng First Nation, MB. Funeral service will be held on Monday, March 21, 2016 at 1:00 p.m. at the St. Alexander Roman Catholic Church, Sagkeeng First Nation, MB. Father Augustine and Reverends Richard and Nancy Bruyere officiating. Condolences may be sent to the family c/o Spirit Road Funeral Services Inc., PO Box 200, Fort Alexander, MB, R0E 0P0, 204-340-6490 or friends may leave a message of sympathy at spiritroadfs@shaw.ca