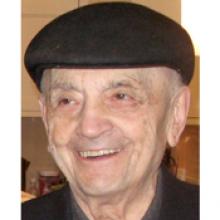 OSCAR CANTOR With sadness, we announce the peaceful passing of Oscar Cantor, age 91, on March 27, 2016. Oscar was predeceased by his twin brother Joe and by his brother Lee. He will be missed by his sister Lily Prince (New Jersey) and many nieces and nephews. Oscar's absence will be greatly felt by his Winnipeg family including nieces Merle Rosenberg (Jerry Sawyer), Rhonda Cantor (Neil Murray), and nephews Edward Cantor (Heather) and Michael Cantor (Brenlee), as well as his great-nieces and nephews Sari, Daniel, Karlee, Lexi, Ryan, Matthew, and Lainee. Oscar was born in Poland on January 7, 1925 and moved to Winnipeg in 1928. His father, Edward founded Cantor's Grocery in 1944. Together, with his twin brother Joe, he successfully ran the business for over 70 years. Oscar was a self-taught successful businessman who took great pride in his work, always aiming to satisfy his customers with the best possible products. His hard work and relentless determination helped build the solid reputation that the store has today. He took great pride in buying his meat locally and believed in fresh meat at affordable prices. Although often described as the quiet twin, Oscar was equally loved by his staff and customers. Customers loved his personalized service and would come from across the city to purchase quality meat. Oscar had a vision and a dream to create a modern and larger version of Cantor's Grocery. That dream became a reality and a brand new 13,500 square foot store was established in 2009. Oscar believed that this would enhance the customer experience and improve the community for many years to come. Oscar and his twin brother Joe had an admirable relationship and worked together for over 70 years. They had a true love and fondness for each other. Oscar was a generous man. He was a dedicated pet owner and loved his dachshunds. He gave selflessly to a variety of charities including the Veterinary Medical Centre in Saskatoon as well as the Health Sciences Centre Foundation. We are grateful to the Simkin Centre staff for their excellent care. We would also like to extend a very special thank you to Lisa and Terry for all of their love, support and compassionate care. We are forever grateful for their dedication and commitment. Graveside services were held Tuesday, March 29, 2016 at Shaarey Zedek Cemetery. Pallbearers were Michael Cantor, Edward Cantor, Sari Rosenberg, Karlee Rosenberg, Daniel Glesby, Ryan Cantor and Jerry Sawyer. Donations in Oscar's memory can be made to the Larry Rosenberg Memorial Endowment Fund (St. Boniface Hospital Foundation, phone 204-237-2067).
Publish Date: Apr 2, 2016

OSCAR CANTOR It is with sadness that we announce the peaceful passing of Oscar Cantor, age 91, on March 27, 2016. Graveside service will occur Tuesday, March 29, 2016, 2:30 p.m. at Shaarey Zedek Cemetery (236 Armstrong at Main Street) with Meal of Condolence to follow at Shaarey Zedek Synagogue. Longer obituary to follow.
Publish Date: Mar 29, 2016