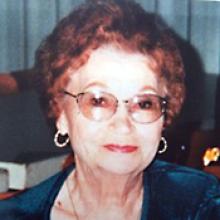 ROSE PRUS 1918 - 2016 Rose Prus passed away at River Park Gardens, Winnipeg, MB, Saturday, March 26, 2016. Born February 10, 1918 in Horod, Manitoba to parents, Wasyl and Mary Woytowich, she was the eighth child of 14 siblings. She married Tom (Anton) Prus in 1938. They lived in Strathclair, MB, raising their four daughters and residing there until Tom's demise in 1981. Rose moved to Shoal Lake, where she worked as a HCW at Morley House until retirement. Winnipeg has been her home for the past 20 years. Rose was predeceased by her parents, her 13 siblings, husband Tom and grandson Michael Shawn Dayton. She is survived by her daughters, Shirley (Jim) Dayton, of Shoal Lake, MB, Gayle (Delbert) Stern, of Minneapolis, MN, Jacqueline (Donn) Ravers, of Larkspur, CO and Brenda-Lynn Prus, of Winnipeg, MB. Grandchildren, Darcy Dayton, of Calgary, AB, Roberta Baydak, of Airdrie, AB and Ashley Short, of Winnipeg, MB; great-grandchildren, Daniel and Matthew Baydak, of Airdrie, AB and numerous nieces and nephews. As an active community member, Rose was a member of the Anglican Church, the ACW, Legion Auxiliary and Rebecca Lodge. Throughout her life, she enjoyed her friends and neighbours, always entertaining others with her wit and sense of humour. As her family, we feel blessed to have had our mother and grandmother in our lives for this amazing length of time. We wish to express our thanks to the staff at River Park Gardens. Their excellent care, kindness and friendship greatly added to Rose's quality of life in her later years. A family graveside memorial will be held at a later date in Strathclair, MB. Campbell Funeral Home, Hamiota, MB is in charge of arrangements.