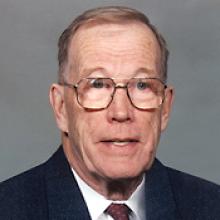 JAMES LAURIE MCGREGOR On Tuesday, March 29, 2016, Laurie McGregor, beloved husband of Betty McGregor passed away at the Golden Door Home in Winnipeg at the age of 92 years. Laurie was born in St. Boniface on July 28, 1923, grew up in St. Vital and attended United College where he met his future wife, Betty Baker. Married on August 2, 1944 and together for 72 years, Betty and Laurie enjoyed a very loving marriage enriched with a large family. Laurie was a devoted and caring husband and father, grandfather, great-grandfather to two sons: Jim (Judy), Bill (Gwen), three daughters: Marilyn (Cliff) Zarecki, Joy (Dave) Mintenko, Jan Leishman (Bill), 12 grandchildren: Kara (Kevin) Janzen, Anne (Scott) Gault, Jill (Greg) Nordby, Lindsey (Don) Ross, Brenna (Kenley Christoferson) McGregor, Stephanie (Kent Martin) McGregor, Ashley (Micah) English, Dana McGregor, Sandy (Scott) Marohn, Alex (Mason) Harder, Rob (Daniela) Mintenko and Christine Mintenko, 11 great-grandchildren: Hannah and Olivia Janzen, Sydney and Harrison Gault, Kellan, Kate and Koltan Nordby, Birkley and Scotia Ross, Peyton Marohn and Benjamin English. During the Second World War Laurie enlisted in the Air Force where he was a ground crew mechanic in squadrons stationed in Alaska and Vancouver Island. He loved to share many humorous stories of these times. He and Betty started their married life in Victoria while he served in the Air Force. Most of their life together was spent in Winnipeg where Laurie spent 68 years in the lumber business, the first 20 working for some of Canada's larger lumber companies. In 1967, he and his wife, Betty, formed Finmac Lumber, a wholesale and processing wood company. The Company prospered and grew. It has become the largest wholesale lumber company in Western Canada presently under the leadership of Laurie's son, Bill. Throughout his life, Laurie always found time to give back generously to the community as a Boy Cub and Scout leader, 60 year member of South Winnipeg Kiwanis Club, and member of the Masonic Lodge. He also sat on many organization boards including Rosedale (Churchill Park) United Church, Manitoba Forestry Association, 402 RCAF, City of Winnipeg SOD, MB Hydro Forest Enhancement Committee and Skills Unlimited. Besides his love of family, Dad loved the family cottage at Delta. He enjoyed many summers there and we all have fond family memories of corn roasts, family reunions, and other great times with family and friends which he organized. There was always a happy crowd at #71 West, often listening to one of Grandpa's many stories! His other interests included tree cultivation, curling at the Fort Rouge Curling Club, fishing with his lifelong friends in Northern Manitoba, hunting at the shooting Shack' at Libau . Laurie and Betty enjoyed traveling the world and made it to all continents. Much of Laurie's travel was with CESO (Canadian Executive Services Overseas) where he spent time helping lumber companies in countries like Guyana, Honduras, Russia and Poland solve issues regarding timber business. Laurie will be deeply missed and his memories cherished forever. Cremation has taken place. A Memorial Service to celebrate Laurie's life will be held at Churchill Park United Church on June 1, 2016, at 11:00 a.m. In lieu of flowers, the family requests that you plant a tree in Laurie's memory.