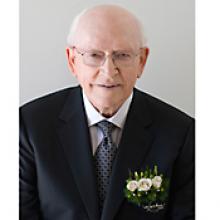 PETER BARKMAN September 8, 1927 - April 3, 2016 While preparing for church Sunday morning, Dad exchanged his tired, diseased body for a new life in glory. Born in Foam Lake, Saskatchewan, where his father owned a mill, Dad spent his early years growing up in the shadows of the great depression. The experience coloured his entire life, for while his own family had little enough, he observed his parents constantly reaching out to help other families left destitute by the extended droughts. It set a pattern of generosity that marked his entire life. In 1945, Dad moved to Winnipeg to attend one year of Bible School at MBBC. During that year he first met Betty Wedel, to whom he would be married in 1949. Together they raised three children: Carol (Keith Braun), Alan (Joy) Barkman, and Kathy (John Milinkovic). Together with brothers Arnold and Edwin, he began a plumbing and heating business in Steinbach in 1947. That humble beginning would, over the following 68 years, develop into the company Barkman Concrete is today. Following Betty's death in 2006, Dad was blessed to find Winnie Reynolds, with whom he shared the last seven years of his life following their marriage in 2009. While his family and many friends will miss him sorely, we are overjoyed to know he is now in glory with his Lord and so much family that has gone on before. The viewing will be Thursday, April 7, 2016, from 9:00 - 10:15 a.m. at Birchwood Funeral Chapel, Steinbach, MB. A private family interment will take place at Heritage Cemetery, Steinbach, MB, prior to the service. A celebration of Peter's life will be held Thursday, April 7, 2016, at 2:00 p.m., at the Emmanuel Evangelical Free Church, 360 Mackenzie Ave, Steinbach, MB. Arrangements by BIRCHWOOD FUNERAL CHAPEL 1-204-346-1030 OR 1-888-454-1030