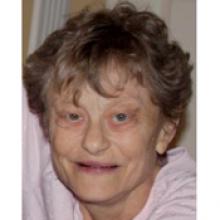 MARILYN HOPE ELIAS June 2, 1952 - March 19, 2016 It is with deep sadness that we announce the passing of our beloved sister, aunty and friend at Victoria General Hospital on Saturday March 19, 2016. Marilyn was predeceased by her mother, Helen Elias (nee Loewen) and father, Henry K. Elias. She is survived by her brothers and sisters; George, Kate, Dave, Laura, Judy and Phil, as well as many nieces and nephews. Marilyn was aptly given the middle name Hope. She was resilient, courageous and kind hearted, with a positive attitude in the face of many challenges throughout her life. She will be greatly missed by all those whose lives she touched. Cremation has taken place, as per her request. A celebration of her life will be held at 11:00 a.m. on Thursday April 14, 2016 at Wiebe Funeral Chapel, 1050 Thornhill St. in Morden, MB. In lieu of flowers, memorial donations may be made in Marilyn's memory to the Manitoba Schizophrenia Society (mss.mb.ca). Wiebe Funeral Chapel, Morden In care of arrangements, 204-822-4755 wiebefuneralhomes.com